God commands the Jews not to build the Sanctuary on Shabbat. The Jews gather gifts to donate to the Tabernacle. 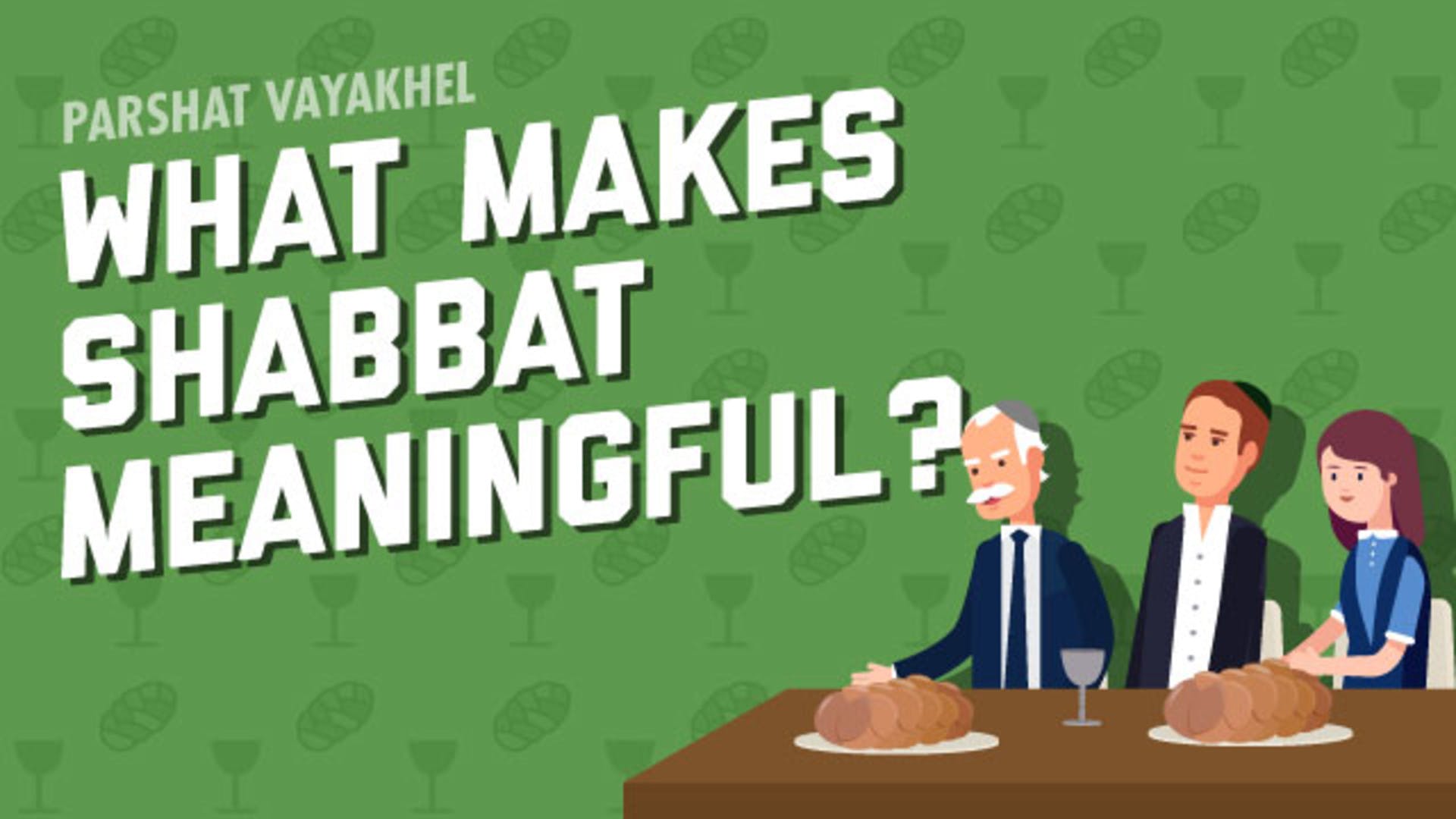 The Meaning And Purpose Of Refraining From Work On Shabbat

Printable Guide
Vayakhel: What Does It Mean To Be Created In The Image Of God?

Parshat Vayakhel begins following the aftermath of the Golden Calf, with Moses' gathering of the people and reminding them of the laws of the Sabbath (Shabbat): that they are to work for six days and rest on the seventh, and that they are to refrain from labor such as the kindling of fire. (The rabbis will later expand on this, enumerating fully 39 forms of labor which are prohibited on the Sabbath, but the Torah only explicitly describes one of them here. Where did the rabbis come up with this? How did they derive these other 38 categories? The answer is: they looked to the story of the building of the Mishkan(Tabernacle), which is the larger context here, in the second half of the Book of Exodus. There were roughly 39 forms of labor which were involved in the construction of the Mishkan (just think about what was required to build the walls, prepare the tapestries, dye the curtains, etc.) and the rabbis understood that whatever was done to make the Mishkan, that is precisely what we must not do on Shabbat. Many people who observe Shabbat each week take this for granted, but the question has to be asked: Why?? What is the nature of this connection? Why should it be that there is this link between the Mishkan and the Sabbath, whereby what is required for one is prohibited in the other? It seems entirely random, arbitrary.

Rabbi Fohrman has a stunning answer to that question, an answer which will leave you looking differently not only at what it means to celebrate Shabbat, but also at the meaning of the Mishkan. You can see it in his video "What Does It Mean To Be Created In The Image of God?"

Once Moses concludes the Sabbath-related instructions, the parsha returns to the topic of the building of the Mishkan. Throughout the prior three parshas (Terumah, Tetzaveh, and Ki Tisa), we read about God's instructions to Moses about how to build the Mishkan. Here, in Vayakhel, we're still talking about how to build the Mishkan, but the story has progressed. It's no longer a conversation between God and Moses. Now, Moses speaks to the people and tells them the "highlights" of God's instructions.

The people learn about which materials are required and what their role is in bringing them. They learn that Betzalel and Oholiav will be the lead craftsmen in charge of the project. (By the way, there’s something very striking about the language describing this appointment. It sounds eerily similar to the language in the Creation story. What do Betzalel’s appointment and creation have in common? Rabbi Fohrman and Imu Shalev offer their analysis in the ParshaLab podcast; listen to it here.)

Finally, construction actually begins. We read about the creation of the tapestries that covered the Mishkan, its walls, curtains, and interior and exterior furniture such as the menorah, altars, and washstand, and more. But so much of these verses in Parshat Vayakhel seem to be a verbatim repetition of what we read back in the prior parshas, when God first explained to Moses how to build the Mishkan.

You can't help but wonder: why does the Torah need to take up so much space with these verses? Why not simply say: "And the children of Israel built the Mishkan just as God had instructed?" And allow us to complicate the question... for while there surely is plenty of verbatim repetition, the careful reader will notice that there are actually some subtle discrepancies. For example, back in Terumah and Tetzaveh, when God originally instructed Israel to build the Mishkan, the instructions were given from the inside out. First came the instructions for the Ark, then the details about the vessels which were to be used and housed in the Mishkan, and then, finally, the instructions for the construction of the Mishkan itself. But when the Mishkan is actually built, here in Parshat Vayakhel, it gets built inversely. First the structure is erected, then the vessels. What are we supposed to learn from these discrepancies? Imu Shalev explores this very question in his video here, and suggests that these discrepancies can actually teach us something profound about how we can best approach God.

Interested in learning more about the upcoming Parshiot? Check out Aleph Beta’s Parsha pages on Parshat Pekudei, Vayikra and Tzav!