Moses learns from God the laws of the Torah for 40 days and 40 nights. The Israelites err in counting and fear that Moses will never return. The build a Golden Calf and dance around in idol worship. Moses returns and smashes the stone tablets that had the 10 commandments written on them. 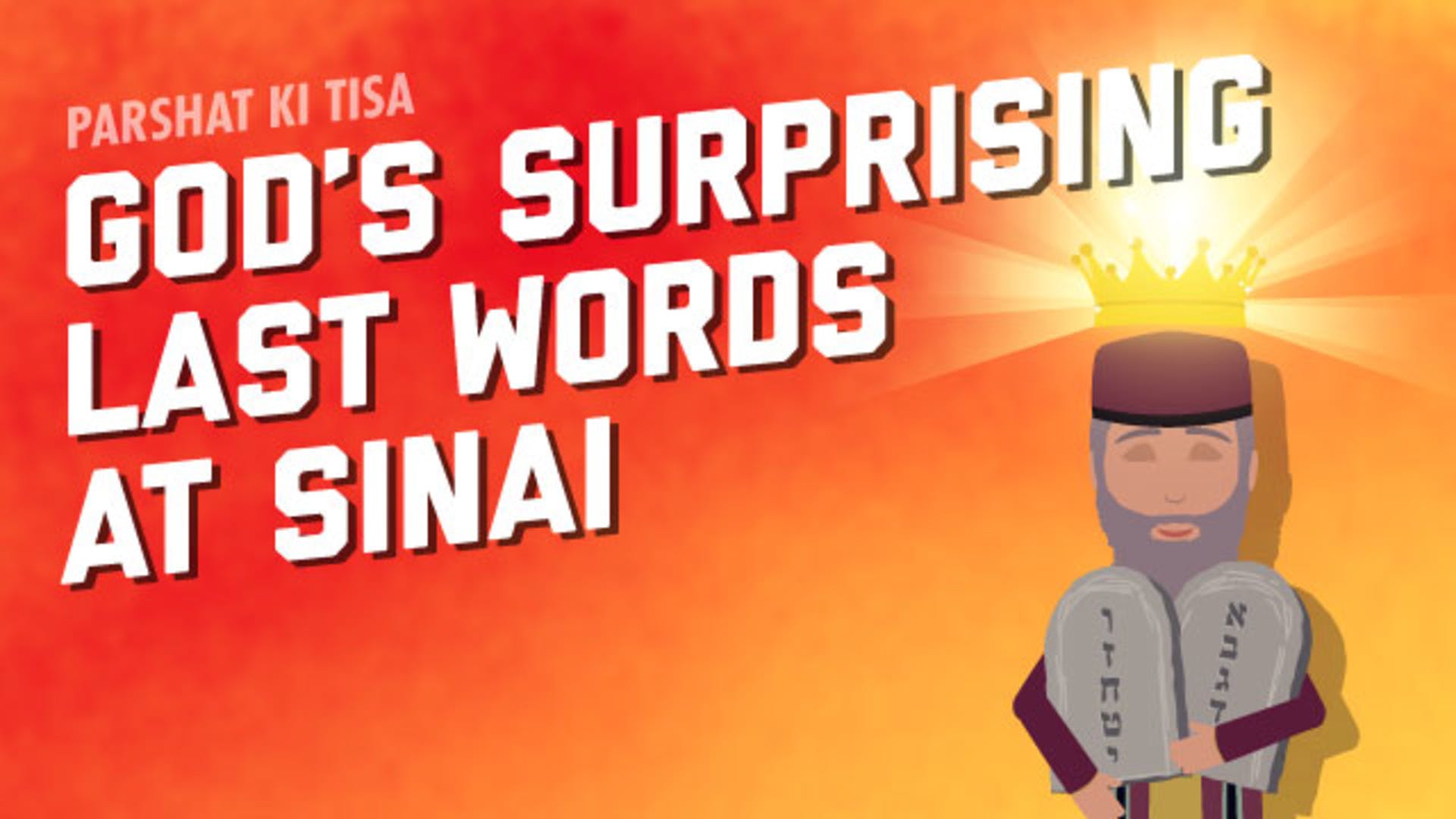 What Moses Learned About The Sabbath On Mount Sinai

The very last words God tells to Moses as he's ready to leave Sinai are about the Shabbat. Why? The rabbis give their explanation to this question in the introduction to the Sabbath morning prayers. But looking at the rabbis' explanation, we are left with more questions! Join Rabbi Fohrman as he dives deep into this prayer, and understands the rabbis' answer to God's surprising last words to Moses on Sinai.
Watch Video

After several chapters that have been filled with the detailed building instructions for the Mishkan (Tabernacle), the Torah begins Parshat Ki Tisa by relaying the last of these commands to Moses. It picks up with a discussion of the census, whereby a half-shekel is taken from each male Israelite and the half-shekels are counted to arrive at a total population count. This is one of several censuses that will be taken throughout Israel's time in the desert. We also read about instructions for the construction of the Tabernacle's beams, its copper washstand, detailed instructions on the "recipe" for the incense offering (which was commanded in the prior parsha, Parshat Tetzaveh), and more.

God identifies one person, a master craftsman, who is to oversee the project of the Mishkan's construction, a man named Betzalel. Another man, Oholiav, is appointed as Betzalel's assistant.

Finally, at the end of these many chapters of hearing about how to build the Mishkan, God communicates to Moses a seemingly unrelated set of laws: that the Israelites are to observe the seventh day as a Sabbath and not do any work upon it. (We first heard about the commandment to observe the Sabbath back in Exodus 16, in the context of the manna, and again in Exodus 20, in the context of the Ten Commandments). It's fascinating: the rabbis of the Mishnah tell us that there's a strong connection between the Mishkan and the Sabbath. You can see it by asking: what kind of work is prohibited on the Sabbath? Do you have to refrain from doing anything which would earn you a paycheck? Anything that is physically strenuous? Neither of those is the answer, according to the rabbis. Whatever was necessary to create the Mishkan, that is forbidden on the Sabbath. Don't dye curtains, don't carry objects, don't bake bread, don't cut wood... these acts and many more are codified as the laws of the Sabbath. Why should that be? It seems so random.

By the way, if you were reading the text in Hebrew, then you may have noticed that these laws about observing the Sabbath sound pretty familiar. That's because the contemporary practice is to quote from this excerpt of text when we recite kiddush on Shabbos mornings. For a fascinating study of these verses of kiddush, see Rabbi Fohrman's video, "A Closer Look At Kiddush."

Once all of God's painstaking details about the Mishkan and His laws about the Sabbath have been relayed, the parsha abruptly switches topic and tone.

While Moses has been atop Mount Sinai, communing with God, dutifully receiving all of these laws, these instructions for the building of the Mishkan, the people have been standing below, at the base of the mountain, waiting for Moses to return. Forty days go by and they lose patience and begin to panic, declaring: "This man Moses, who brought us up from the land of Egypt — we don't know what has become of him." What does that lead them to do? Perhaps the single most egregious sin in the history of the Israelite people: they demand that Aaron build for them a golden calf to worship. God is furious and, terrifyingly, He threatens to destroy the entire people.

Moses, also furious, descends the mountain and smashes the tablets of the Ten Commandments that God just gave to him. But when talking to God, Moses advocates for the people, speaking back to God, putting himself on the line, begging God not to destroy the people, to rekindle His love for them. What is Moses doing in these verses? How could it be that a mortal being can attempt to "persuade" the All-Knowing Master of the Universe to do anything?? To understand just what makes this conversation so dramatic, and why it is that God appears to "change His mind" in response to Moses' arguments, see Rabbi Fohrman's video.

And there's another question that we're left grappling with. Moses somehow does persuade God to have a change of heart, or so it seems, but does that mean that the people are totally forgiven for what they did? Can God thoroughly forgive such a heinous crime — and if He can, can we assume that God will always forgive us for our sins, no matter how severe, even in our generation? Imu Shalev and David Block explore this question in their video, "Will God Always Forgive Me?"

Ultimately, while God doesn't destroy the people, there are ramifications for the sin of the Golden Calf. God explains that He will be sending an angel, an intermediary, to guide them through the desert (in place of His own presence).

In the remainder of the parsha, God refuses Moses' request to "see His face," explaining that a person cannot see God's face and live, and instead shows His back to Moses (a mysterious account which demands explanation). God instructs Moses to hew a new set of tablets to replace the first, the set which Moses had smashed in anger. God teaches Moses the Thirteen Attributes of Mercy, a powerful and mysterious formulation which is to be recited in the aftermath of sin, throughout the generations, whenever the people seek to invoke God's mercy.

For a much more in-depth study of the Golden Calf episode, Rabbi Fohrman has a 12-part audio series that shows that the Torah's entire description of this event is actually arranged in a very unique and curious pattern — he shows you how to spot the pattern, and explains what it means and how it changes the way that we should understand this formative story in the life of the children of Israel. Watch the series here: "Shattered Tablets And The Calf Of Gold".