God makes Aaron and his sons the priests of Israel who job it is to maintain God's Tabernacle. Aaron's priestly uniform is ornate. And, it is his job to run the Tabernacle and any sacrifices made. 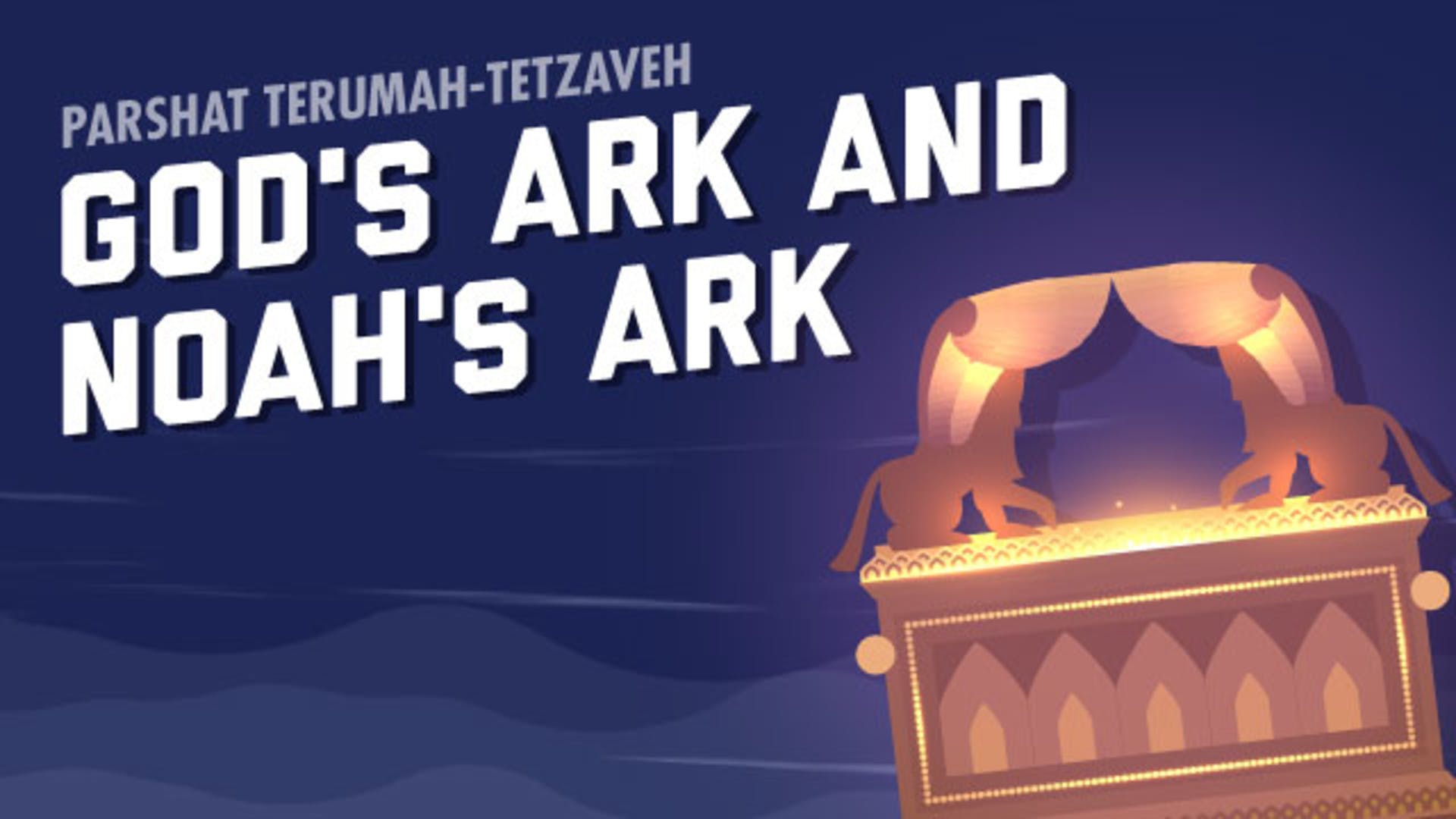 Uncover the extensive parallells between God's ark in the tabernacle and Noah's ark in the flood, and see how we can learn from their mysterious connections.
Watch Video

Printable Guide
Tetzaveh: What If God Has A Physical Presence In This World?

Parshat Tetzaveh is a continuation of the themes that began in Parshat Terumah: the creation of the Mishkan. (For more on the meaning of the Mishkan/Tabernacle, read our Terumah summary.) We already heard the start of God's instructions for how to construct the Mishkan, and this parsha focuses on other aspects of the Mishkan, though not on the physical structure of the Mishkan itself. Instead, it begins with a detailed description of the garments that will be worn by the priests (kohanim). Aaron and his sons (Nadav, Avihu, Elazar and Itamar) have been designated to serve God on behalf of the people as priests (Aaron as High Priest, his sons as regular priests) — and that service requires them to wear special clothes and to master certain rites and rituals. The designation is eternal, meaning that any man who is descended from Aaron will inherit this designation as a priest (kohen) among the Jewish people. Indeed, in Parshat Tetzaveh there is a description of how future High Priests are to be inducted, to replace Aaron.

What are the special clothes that the priests, and especially the High Priests, need to wear? Parshat Tetzaveh discusses in detail the ephod, breastplate (choshen mishpat) with the urim v'tumim (a parchment containing God's name), the me'il (robe) and tzitz (crown), tunics, turbans, sashes, pants, and more. Is there any kind of inherent spiritual meaning in these details? Rabbi Fohrman and Imu Shalev explore some mind-blowing possibilities in their Parsha Lab podcast conversation on Parshat Tetzaveh here.

What happens after the description of the priestly garments? God instructs Moses about how to go about consecrating the priests. It's an elaborate ceremony that involves their immersing in a mikvah (ritual bath), dressing in the aforementioned priestly garments, and bringing a series of offerings to God.

The instructions are in this parsha, though we don't read about the actual fulfillment of these instructions until the Torah's description of the inauguration of the Mishkan in Parshat Tzav and Parshat Shemini, in the Book of Leviticus.

Once the Torah concludes the discussion of the priestly garments, the details of the consecration ceremony, and a note about how future High Priests are to be inducted, it moves to describe a few important rites/rituals of the Mishkan which will take place on a regular basis – and it doesn't get more "regular" than the korban tamid ("eternal offering"). This offering consists of two lambs which are brought as an offering to God, one in the morning and one in the afternoon, and it is all carried out by the priests. The discussion of the korban tamid ends with a beautiful promise from God: that once the Mishkan is built, God will "dwell amongst" the people.

This is in stark contrast to the previous mode by which the people had related to God in Egypt, when they suffered in slavery and, for all intents and purposes, lacked a relationship with God, calling out to God and not receiving any answer. That said, it also seems to denote a new phase of relationship which is distinct from what we saw at the moment of revelation at Mount Sinai — when the people surely saw evidence of God's presence, manifested as miraculous thunder and lightning, but it would be hard to call it an intimate moment of God dwelling among the people. But not so fast. There are actually some important and thought-provoking parallels between the Mount Sinai experience and the Mishkan. Imu Shalev and David Block explore them in their video, "The Hidden Secrets In The Walls Of The Mishkan".

The parsha concludes with a description of a twice-daily incense offering which the priests are to bring, as well as a description of the incense altar which will stand in the courtyard of the Mishkan.