The Torah continues to describe the laws of animal sacrifices. We learn about three different types of offerings: Sin offerings, Burnt offerings, and Homage offerings. 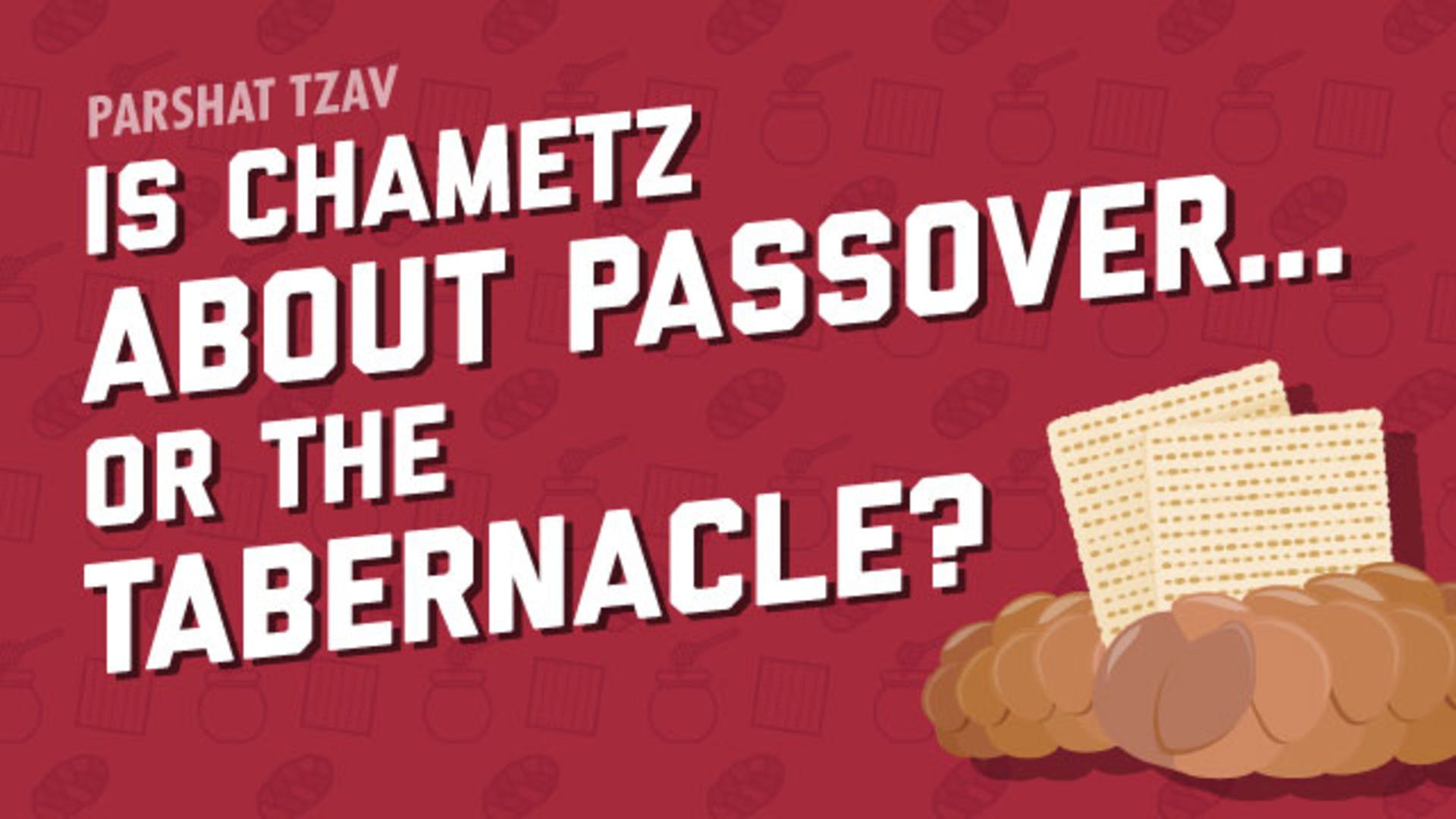 The Real Meaning Of Chametz

For some reason, the Torah prohibits us from bringing chametz with offerings on the altar. Isn't chametz about Passover? Why would it be prohibited on the altar?
Watch Video

Printable Guide
Tzav: What Does It Mean To Survive?

Parshat Tzav picks up where Parshat Vayikra left off, laying out the details of offering korbanot (sacrifices) to God. During the people's time in the desert, these korbanot were offered in the Mishkan (Tabernacle) but ultimately, they prefigured the korbanot that would be offered in the Beit HaMikdash, the Temple, to be built one day — several hundred years in the future — in the land of Israel.

Now, what sacrificial laws are described in this parsha? First, the command to remove the ashes from the altar each day. Then a discussion of laws of certain mincha ("meal") offerings as well as chatat ("sin") and asham ("guilt") offerings, each of which had been touched upon in Parshat Vayikra — but now with new laws added. The parsha also explains the laws of the toda ("thanksgiving offering"), a sacrifice brought by a person who survived a life-threatening situation and wants to express his gratitude to God. Rabbi Fohrman has a video here in which he explains, in-depth, the different kinds of people who might bring a thanksgiving offering and invites us to imagine what they have in common with one another. Additional laws are sprinkled throughout, such as a repeated prohibition on eating blood or forbidden fats, instructions about how to purge vessels (which are relevant to the laws of kosher food), and a discussion of some of the ways that a sacrifice can be invalidated (improper intention is one of the ways).

The question must be asked: What is the spiritual meaning of these bizarre acts? To take an animal, slaughter it, or even just some bits of flour and oil, and offer it up on an altar... why does God desire for us to do that? What's the point? What does it accomplish? What should we be thinking and feeling as we do it? Should we expect that it will somehow alter our relationship with God? And if so, how? These are just the questions to be asking. On our Parshat Vayikra page, we linked to a video from Rabbi Fohrman that offers one part of an answer to this question, but here, we want to recommend another: "How Can I Confront Sacrifices?" In this video, Imu and David ask these very questions and offer an insightful philosophical framework for understanding what sacrifices are all about.

Now, Tzav isn't all about sacrifices. After the laws of sacrifices are finished, the tone of the parsha changes as it returns to narrative, telling us the story of the dedication ceremony of the Mishkan and the inauguration of the sons of Aaron as kohanim ("priests"). We read about the details of the ceremony, in which Moses gathers Aaron and his sons to the courtyard of the Mishkan before all of the people and enacts an elaborate ritual: washing them, dressing them in priestly garments, annointing them with oil, and the bringing of a variety of korbanot. The kohanim are asked to remain in the Mishkan's courtyard for seven days. What happens after that seven day waiting period is the topic for next week's parsha, Parshat Shemini (which literally means "eighth").

By the way, the details of this priestly inauguration ceremony have a lot in common with another ritual that is described elsewhere in the Torah... another place where we encounter the following six elements:

5. Staying in place for seven days

Is it merely a coincidence? Or are these parallels trying to tell us something? And if so, what? In this video, Rabbi David Block reveals that "other" story and offers us his theory as to the meaning of their connection.