Aaron and his sons make offerings to God at the Tabernacle. The people are joyous because God accepts the offering. We begin to learn about the laws of Kashrut (Kosher food). 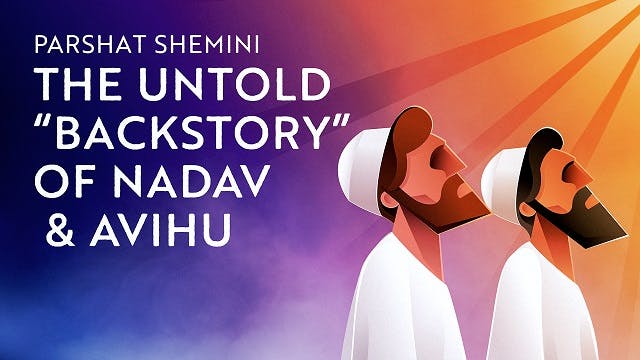 Did you know that the Torah tells us Nadav and Avihu's "backstory"? Learn about the life-changing experience that led the sons of Aaron to their deaths – and avoid making the same mistake.
Watch Video

Printable Guide
Shemini: Why Did God Reject Nadav And Avihu?

PREMIUM
Printable Guide
Shemini - What Does Aaron Teach Us About Loss?

The Torah describes the dedication ceremony for the Mishkan (Tabernacle) and the inauguration of Aaron's sons as kohanim (priests); that is how Parshat Tzav, the prior parsha, had concluded, and that is how Parshat Shemini begins. Whereas in the first part of the ritual, it was Moses who was the master of ceremonies, so to speak — Moses was the one who was washing Aaron and his sons, dressing them, anointing them, bringing sacrifices — now it seems that Aaron and his sons come into their full power as kohanim as they take on the duties of offering sacrifices. Moses commands them to bring a variety of korbanot (sacrifices), and he explains to them what he expects to happen, at the climax of this ceremony:

And Moses said, "This is the thing the Lord has commanded; do [it], and the glory of the Lord will appear to you." (Leviticus 9:6)

Aaron, and his four sons by his side (Nadav, Avihu, Elazar, and Itamar), dutifully discharge all of their responsibilities, bringing the sin, burnt, and mincha offerings that Moses had commanded. Once the sacrifices have been brought, Aaron blesses the people, and he follows Moses into the Mishkan. When the two men come out, something miraculous happens: the "glory of God" appears to all of the people and a fire issues forth from heaven and devours the offerings from the altar. Not since Sinai have the people been privy to such a sight, such an open manifestation of God's presence and His reaction to their worship. Astonished, overwhelmed, awed, the people fall to the ground.

But two people standing there at the ceremony have an entirely different reaction: Nadav and Avihu. They don't fall to the ground. Instead, they reach for their pans, fill them with incense and fire, and rush towards the Mishkan. No sooner do they do this than they are struck dead, torched by God's fire, consumed like one of the sacrifices just described. It is a tragic and mystifying story: because it's hard for us to understand what was their sin (I thought bringing sacrifices was a good thing!), hard to see how such pious people, these newly inaugurated priests, could have crossed God so egregiously, and painful, leaving us empathizing powerfully with Aaron, who is famously stoic in the face of his sons' death. How can we make sense of this account, and what are we supposed to learn from it?

We have a series of videos at Aleph Beta that grapple with these very questions: For a deeper understanding of the very nature of Nadav and Avihu's sin — what in the world did they do wrong?? — see Rabbi Fohrman's video, "Why Did God Reject Nadab and Abihu?"

For a study of the poignancy of Aaron's reaction to his sons' death, with a lesson for how we can relate to God in our own times of loss — in those dark moments when we feel anger towards God, when we don't want to be close — see "What Does Aaron Teach Us About Loss?"

And for a journey into the minds of Nadav and Avihu, to attempt to identify an answer to the question: Why did they do it? What motivated them to pick up their fire pans and rush into the Mishkan? Why did they react differently than everyone else standing there that day?", see our latest video on Shemini.

After the account of Nadav and Avihu's death, Parshat Shemini changes course and reverts from narrative back to law: in this case, the laws of kashrut (permissible food). We learn which types of animals are kosher — and if not the specific types, then the physiological markers that distinguish kosher animals from non-kosher (for example, kosher fish have fins and scales). There is also a discussion of the contraction of tumah ("ritual impurity") from certain animals. The parsha concludes:

"For I am the Lord Who has brought you up from the land of Egypt to be your God. Thus, you shall be holy, because I am holy." (Leviticus 11:45)

That, indeed, seems to be the thrust of all of these detailed laws: that the higher purpose of keeping kosher is that, somehow, it helps us to imitate God, to achieve holiness.

But that, understandably, leaves a lot of questions unanswered. How, exactly, might these laws of keeping kosher help us to achieve holiness? What does it matter whether we eat animals that chew their cud, or have split hooves, or fins, or scales, or anything else? Imu and David tackle part of this question and offer a surprising answer in their video, "Is There Any Meaning Behind The Laws of Kashrut?"