In this parsha, we learn the laws of Kosher food, the details of the three festivals, and our commandment to visit Jerusalem three times a year. 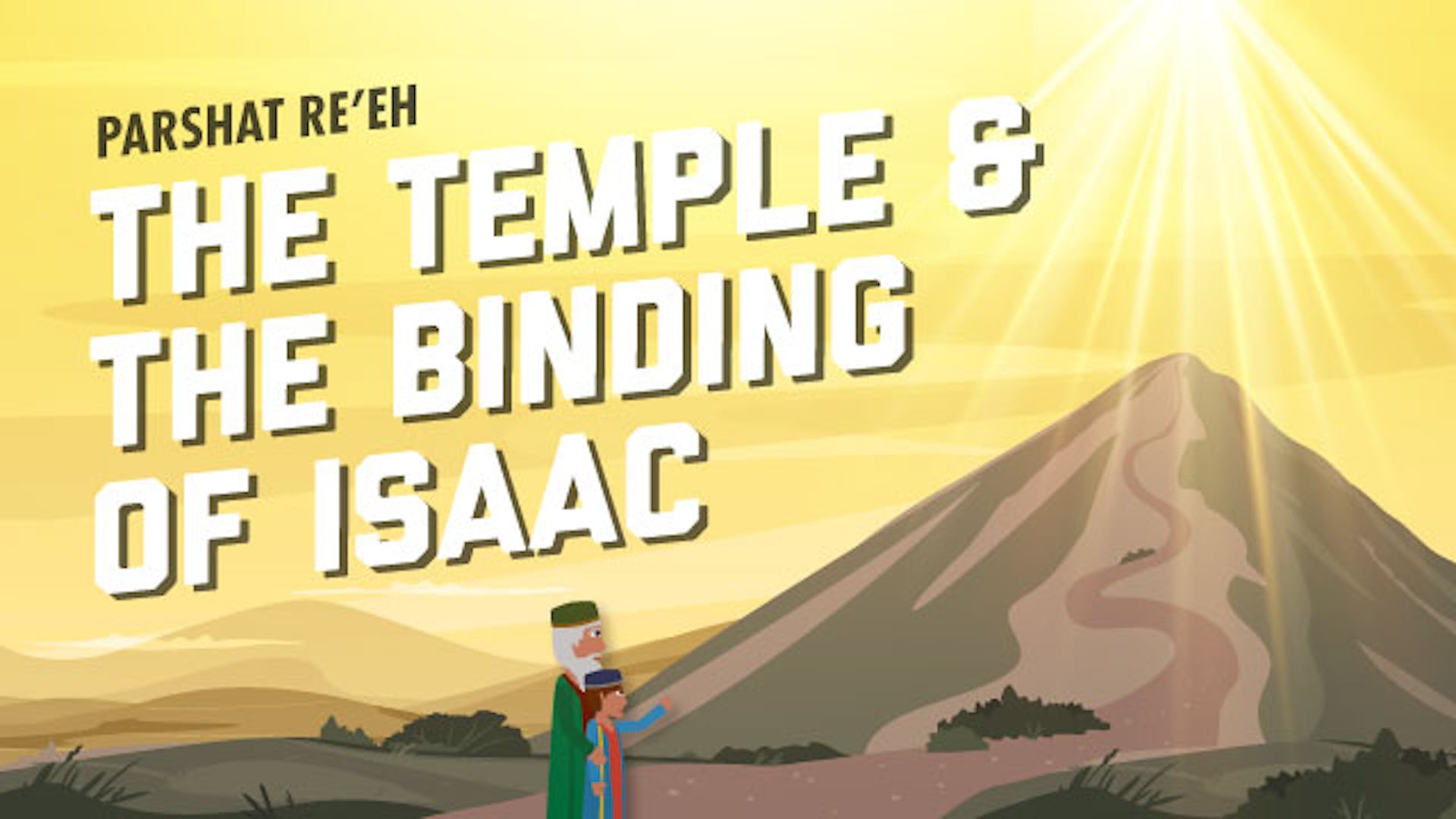 The Significance Of Mount Moriah In The Bible

Har HaMoriah. Mount Moriah. Where have you heard that before? It's the mountain where the Beit HaMikdash was built. And it shows up one other time in the Torah: in the binding of Isaac. Coincidence? We think not.
Watch Video

Parshat Re'eh covers a lot of ground. A continuation of Moses' grand speech to the people, which began in Parshat Devarim, this segment of Moses' speech opens with a bold promise:

You get blessings if you listen to God and follow His laws, and curses if you don't. Moses then describes an elaborate ritual that the people are supposed to do that involves standing atop these two mountains and actually proclaiming these blessings and curses. (Parshat Re'eh doesn't go into much detail at all about the procedure, but it will come up again in Parshat Ki Tavo, and when it does, Moses fills in the blanks.)

And then Moses dives into a description of a range of different laws – presumably examples of the kinds of laws that we need to obey in order to receive blessings and not curses. The first set of laws, and much of the parsha as a whole, has to do with distancing ourselves from idolatry. For starters, when we enter the Promised Land and send out its inhabitants, we're supposed to destroy all vestiges of idolatry that they left behind. But beyond that, we're supposed to make sure that our worship of God looks different from the way that the pagans serve their gods. For example, God doesn't want us to establish altars and offer sacrifices all over the Promised Land.

Rather, Moses explains that God is going to choose one place – and we need to bring all of our sacrifices there. (We will later come to know this place as the site of the Beit HaMikdash, the Temple – whose construction is described in Melachim, the Book of Kings). This is somewhat surprising, since it marks a change from what our forefathers did. We had read in the Book of Genesis that our forefathers built many altars to God, offering sacrifices all over the place. But by the time we enter the land of Israel, God is intent that His chosen people not do that — and perhaps this is a part of God's wider concern that His nascent nation separate itself from the nations around it. Sacrifices can only be offered in one centralized location.

By the way, that doesn't mean that we need to come all the way to the Temple in order to eat meat. In this parsha, Moses acknowledges that some people live far away from the Temple, and explains that we are permitted to kill animals (that would otherwise be fit for sacrifice) outside of the Temple and to eat them, wherever we are. (There is, however, one part of the animal that can never be eaten, and this applies whether the animal is fit for sacrifice – i.e. domesticated – or not – i.e. wild: you can't eat the blood. (This is a reiteration of a law that appeared earlier in Parshat Noach and also Parshat Acharei Mot, and seems to urge us to take seriously the intrinsic value of animal life. For more on this, see "Are We Supposed To Eat Animals?" and "Where Is The Soul?")

Moses then continues to detail other laws that are meant to distance us from the practices of idolaters: don't engage in child sacrifice; don't try to convince others to serve idols (a severe punishment awaits you); don't listen to the words of a prophet who encourages you to serve idols, even if he seems to be able to prove that he is a real prophet (he's not!); and don't get a tattoo or otherwise deface your body.

You may have noticed that while God tells us that He abhors child sacrifice, at the very start of our people's history, God came to Abraham and asked him to do just that: to bind his son Isaac on the altar as an offering. How are we to reconcile the story with the law? Our podcast, "How Does God Really Feel About Child Sacrifice?," grapples with that very question.

When you read these laws, you may find yourself nursing a somewhat nagging question. The way that Moses describes idolatry, he makes it sound like something that's really tempting, something that we would have a strong inclination to want to do – and therefore we have to put all of these laws in place to stop us from doing it. But is that how you personally relate to idolatry? If you passed by an idol on the street, would you be overcome by the urge to bow down to it? To run away from God and start serving multiple false gods? In the 21st century, isn't this pretty hard to relate to? What's going on here, and what accounts for the gap between the world as Moses describes it and the world as we know it? For more on that, see our video,"Why Would Anyone Want To Worship Idols?"

What follows next in Parshat Re'eh are a list of dietary restrictions, which we first heard about in Parshat Shemini: about which animals we can and can't eat, how to tell them apart, and how to cook them (hint: don't cook animals with milk!). These laws, which constitute the laws of kashrut or "proper" food, are probably among the most well-known aspects of contemporary Jewish practice. Many people who know little about Judaism are familiar with the idea that Jews don't "mix milk and meat."

The question is: Why? Is it a matter of health? Is it, like so much of the preceding laws in this parsha, a matter of separating us from the other nations? Or is the rationale for kashrut somehow "unknowable" to us or hidden from us – it's simply an exercise in obeying God? In a fascinating video, "Why Does Judaism Need The Written Law And Oral Law?," Rabbi Fohrman looks at these laws about not mixing milk and meat and proposes a theory that may change the way you understand not just kashrut specifically, but Jewish law writ large.

The next part of Parshat Re'eh details two laws that have to do with agriculture. First, we hear about the law of ma'aser, which requires that a portion of our yearly crops be given away – to the Levi, to the poor, and to be eaten before God in Jerusalem. And second, we hear about the law of Shemittah, previously described in Parshat Behar, which requires that we let the land rest every seventh year, and that we return debts and free slaves.

The parsha describes how we're actually supposed to go about releasing our slaves in the seventh year, and it's pretty odd: we're meant to send them out with gifts, and if they refuse to go, we're supposed to do something violent and graphic: pierce their ears against the door. What is all of this about? Why send them out with gifts? Why the violence? In his video, "The Strange Laws Of Jewish Slavery," Rabbi Fohrman shows how this law about how to treat a Jewish slave is integrally connected to a story, from earlier in the Torah, about our experience as slaves in Egypt – and how you can't understand one without understanding the other.

Finally, the parsha ends with a recap of the Shalosh Regalim, the three festivals on which we come to the Temple to celebrate before God: Pesach (Passover), Shavuot (Feast of Weeks), and Sukkot (Feast of Tabernacles).