In Ki Teitzei we learn about 74 different Mitzvot (commandments). The commandments range from inheritance laws, to returning lost objects, to building a fence on one's roof, to loaning with interest, collecting debt, divorce, and more. We also read about the commandment to remember what Amalek did to us. 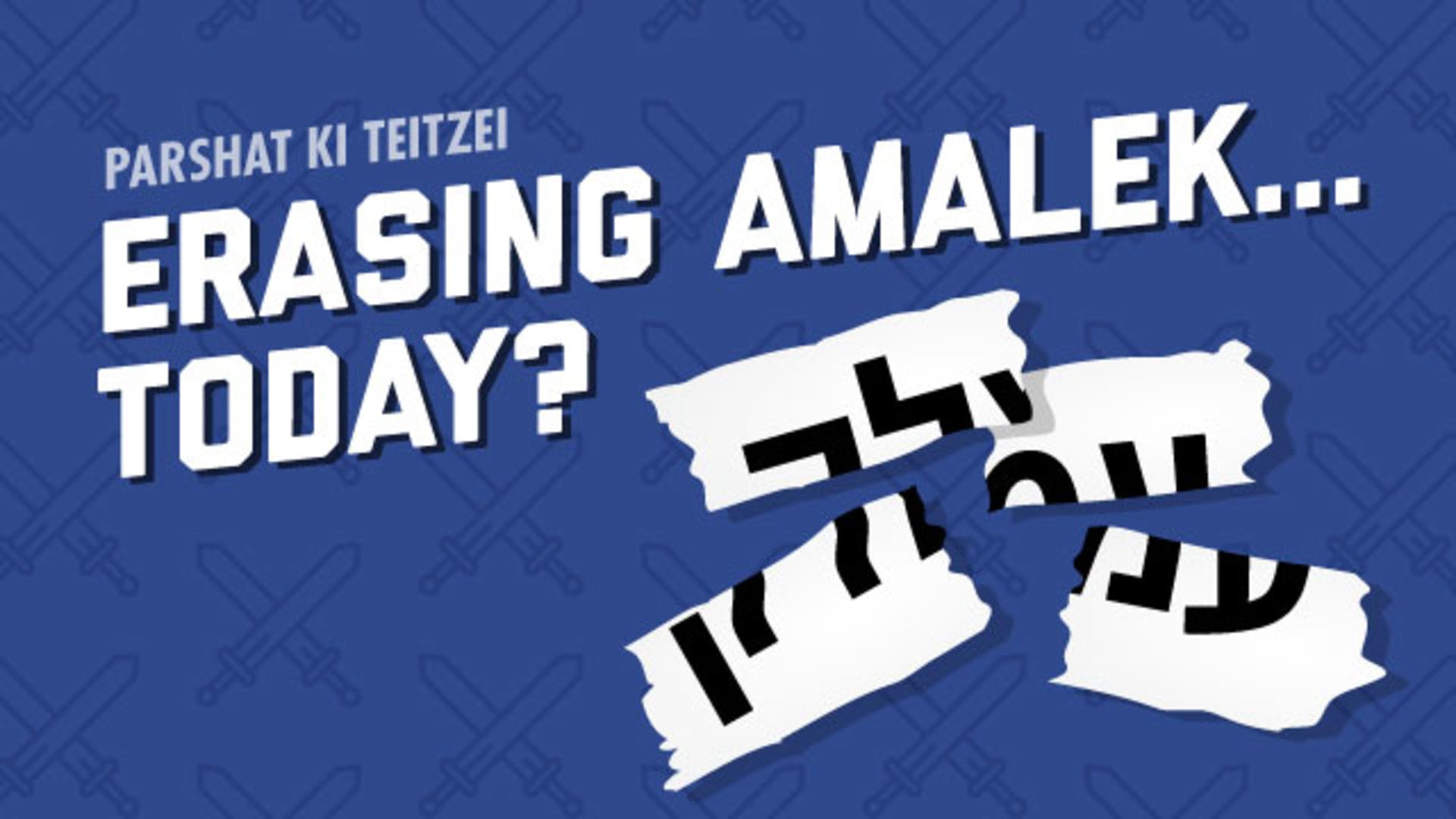 How To Combat The Evil Of Amalek Today

The mitzvah to erase Amalek's memory is both troubling and confusing. But what if there's more to it than meets the eye? This video will give you a whole new understanding of what this mitzvah means.
Watch Video

Parshat Ki Teitzei, the sixth parsha in the Book of Deuteronomy, is chock-full of laws. It opens with a law about a woman who is taken as a captive in war – the eishet yefat to'ar – a law that some modern readers might find troubling. According to the law, during wartime, a man is allowed to take a woman captive and bring her into his home. The woman is allowed one month to grieve for her family from which she was taken. After that month, the man can choose to either make her his wife, or send her out of the house.

The next law is the law of the senuah, the hated wife. The Torah explains that if a man has two wives and he favors one over the other, his favoritism cannot trickle down to the children. So if it is the less favored wife who bears him a child first, he has to treat that child as the rightful firstborn. He can't decide to treat the child of the favored wife as the firstborn instead.

Now, we're in the Book of Deuteronomy and this is all just legal talk... but if you've read the first book of the Torah, the Book of Genesis, you're probably thinking that these themes of firstbornness and favoritism sound very familiar. Rabbi Fohrman offers some compelling evidence that suggests that there is a direct connection between the stories in the Book of Genesis and the articulation of this law in Deuteronomy. His evidence is worth a look. Check out his video, "The Hated Wife."

Next up: the ben sorer u'moreh, the rebellious son. Parshat Ki Teitzei teaches us that a son who does not listen to his mother and father should be brought outside to the city gates and pelted with stones. (The description is violent, hard to read – and the rabbis, in their discussions in the Talmud, wonder whether or not this extreme rule was ever in fact put into practice.)

Next up, we learn that a person who was hanged as punishment for a crime should not be left to hang overnight. That would somehow be a blasphemy against God – presumedly because as human beings, we are made in God's image, and therefore our bodies must be treated with some modicum of honor. To leave the body dangling there once the punishment is done, apparently that is a step too far. Instead, the body should be taken down and buried – and from here the rabbis derive the general law that all Jews should be buried as soon as possible after they die.

Next, a smattering of laws that deal with animals: the command to return a lost animal to its owner (and we learn from here more general principles about returning any lost object), to help another person to relieve a struggling animal of its load, and to send away the mother bird from her nest before taking the eggs or chicks. Returning lost objects and minimizing animal suffering seem like reasonable and decent things to do, but the last law, shiluach hakan – the one about sending away the mother bird – is somewhat mysterious.

The commentators offer different explanations for why we should do this, and some possibilities include "so that the mother bird shouldn't suffer" and "to make us into more sensitive and compassion people"... but Rabbi Fohrman points out that there are some mysteries in the language of the Torah's verses here that seem to point to a breathtaking new dimension of understanding. To see it for yourself, check out "How To Merit Long Life."

If you enjoy that video, then consider taking an even deeper dive into this material with Rabbi Fohrman's four-part series, "The Parent Trap: Falling Prey To Those We Love." There Rabbi Fohrman expands on his explanation of the mother bird law and shows how it is intricately tied to something that may surprise you – to one of the pivotal stories of our forefathers from the Book of Genesis. The insights are stunning, quite frankly... and believe it or not, it all started with a well-placed comment on the discussion boards from one of our users here at Aleph Beta. Check it out here.

Some of the other laws that follow in Parshat Ki Teitzei include:

In the concluding chapter of the parsha, we find two important laws: the law of yibum ("Levirate marriage") and the law of remembering Amalek. Both are a bit unusual.

The law of yibum teaches that if a man dies before he had the chance to have children, leaving behind a wife, then his wife should marry his oldest brother (assuming he consents), and the two of them should have children. Why? In the words of the Torah: "So that his [the deceased brother's] name shall not be obliterated from Israel." It seems like an attempt to shore up a legacy for this man who otherwise wouldn't have one.

Now, this law of yibum, of "Levirate marriage," buried here in the middle of the Book of Deuteronomy might seem obscure... but what if we told you that this notion of yibum actually lies at the very heart of the Torah itself? That without truly understanding the idea of yibum, you can't, for example, understand why God chose Abraham to father His chosen nation? It might sound like a wild claim... but aren't you a little bit intrigued?

To get just a taste of this theory, you can check out Rabbi Fohrman's short video, "Why Did God Choose Abraham?", but to really see the theory fleshed out in all of its glorious detail, you'll have to watch his Shavuot course on the Book of Ruth, "Ruth: A Story 30 Generations In The Making," in which Rabbi Fohrman ties together Abraham, Ruth, and the concept of yibum in pretty striking ways.

And then there's the law that we not forget Amalek, that we completely annihilate the Amalekite nation and its "memory." You may recall that the nation of Amalek had launched a vicious attack against us when we were heading out of Egypt. But why would God command that we wipe out an entire people? What did they do that was so evil that they deserve to be completely erased from history? And why does the Torah use this cryptic language of "memory" and "forgetting" to express this command?

Our parsha holds a surprising key for solving the Amalek puzzle, through a completely different mitzvah that touches on themes of memory and erasing. Looking at these two mitzvot together will open up a whole new way of understanding the battle with Amalek, what it meant for the ancient Israelites, and what it may mean for us today. Ami Silver and Daniel Loewenstein explore these ideas in their podcast conversation, "Remember Amalek; Don't Forget."