In this parsha, Moses tells us that we have a fundamental freedom to choose. We can choose blessing or curse, and we need to choose the blessing. 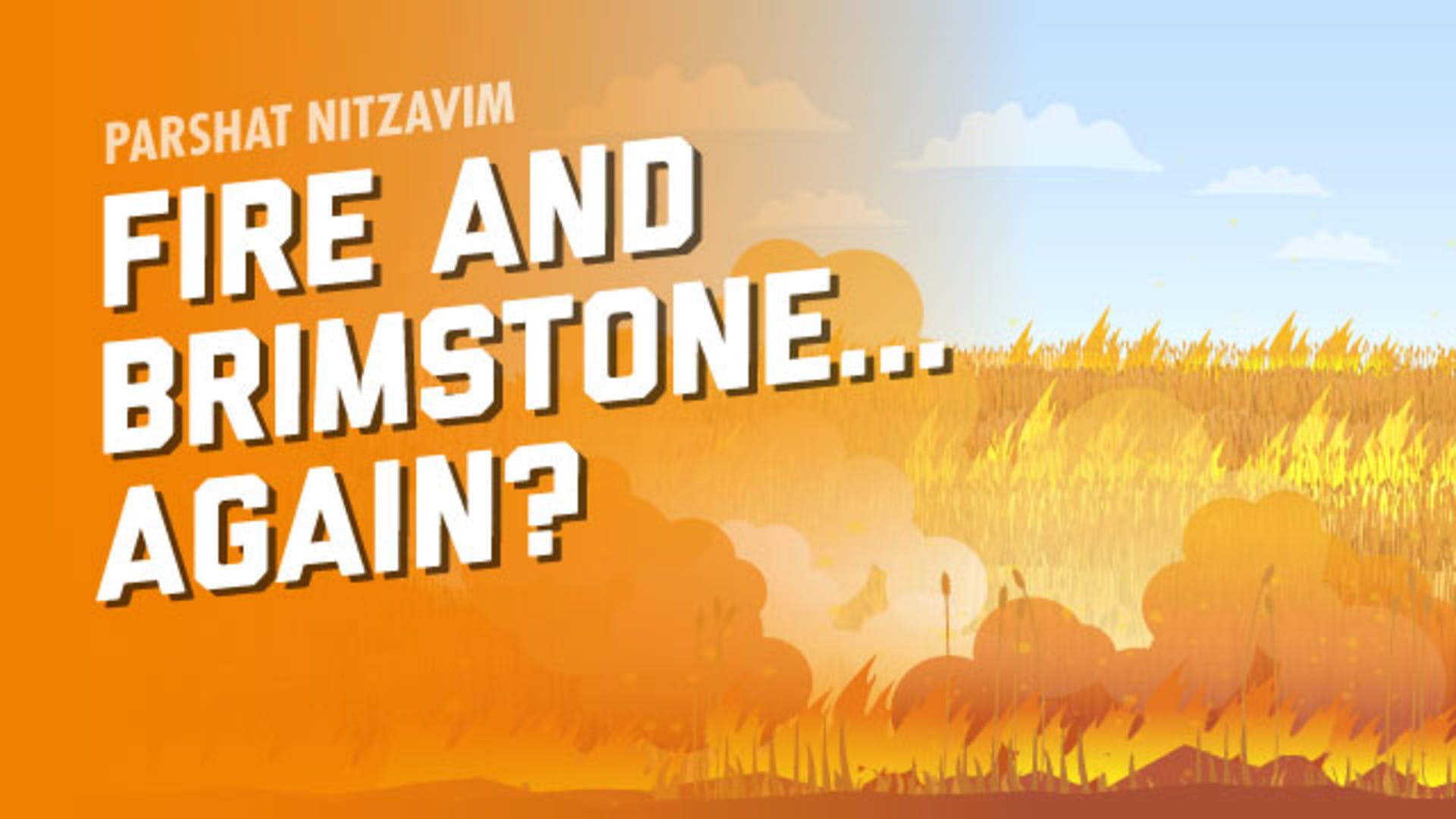 The Surprising Relationship Between Blessing And Curses In The Bible

God only warns us about a Sodom-like punishment once in the Torah. But for what sin, and why? Watch and find out.
Watch Video

Parshat Nitzavim, which is sometimes read as a double portion with Parshat Vayeilech, consists of only one and a half chapters... but it's not to be overlooked, for it is chock full of some of the most important quotes and principles in the entire Torah.

Moses opens the parsha with a grand declaration to the people:

So Moses makes clear the terms of their existence, the reality of what it means to be a member of God's chosen people: that every single Israelite, every last one, from the elders to the wood cutters, is included in God's covenant. As Moses will reiterate later in the parsha, every single person is therefore obligated to follow God's laws. If they do, they will be rewarded for it, and cursed if they don't.

And then, as Moses continues his grand speech, he takes it a step further and says something which is quite shocking:

"But not only with you am I making this covenant and this oath, but with those standing here with us today before the Lord, our God, and [also] with those who are not here with us, this day." (Deuteronomy 29:13-14)

It's incredible... Moses is actually saying that all of their future descendants will be obligated by this covenant as well. Theologically, it's nothing short of radical. How can you broker a contract between parties who have not yet come into existence? How can you place obligations upon someone who hasn't consented at all? It may go against the grain of modern Western legal theory – but here, in the Torah, it is articulated loudly and clearly. And yet the full ethical implications of that idea are something that the rabbis have been grappling with ever since.

In the next part of Parshat Nitzavim, Moses goes on to talk about what will happen if someone, despite being obligated, chooses not to follow the terms of God's covenant. He details a very specific case, the case of a person who decides to violate the Torah but does it in a very particular way:

"...that he will bless himself in his heart, saying, 'I will have peace, even if I follow my heart's desires,' in order to add the watered to the parched." (Deuteronomy 29:18)

The poetry here is very hard to understand, but one line of commentators, among them Rav Shimshon Raphael Hirsch, interprets it as follows:

"I can act the way that I want to act, and I won’t have to endure any consequences for it. You know why? Because I'm surrounded by righteous people, and God is going to give them rewards – like rainfall and peace – and I'm just going to get swept up in those rewards. God won't punish little old me."

But that person is wrong, Moses says, and God won't allow him to escape the consequences of his actions. He will receive a terrible punishment.

The thing is, if you take a look at the way that the Torah describes his punishment, you start to notice some very curious things. Like the fact that it seems very reminiscent of another punishment in the Torah: of God's destruction of the cities of Sodom and Gomorrah (Amorah) back in the Book of Genesis.

So is there more to this mysterious connection between Nitzavim and Genesis, between this covenant-breaker and what happened back in Sodom? And if so, what is the Torah trying to communicate to us? Daniel Loewenstein explores that very question in his video, "Fire and Brimstone... Again?"

If that description of the sinner and his Sodom-like punishment left you with a feeling of unease, then the next part of Moses' speech should give you some sense of comfort and resolution: because Moses reassures the people that repentance is possible. No matter the sin, there will come a time for the Israelites to repair their broken relationship with God:

Moses continues with his stirring words, with more poetry, insisting to the people that they have what they need to observe God's Torah:

This powerful notion will be viewed by the rabbis not merely as a grand statement about an individual's readiness and ability to follow God's law, but also as an important description of how it is that we, as humans, have the license to interpret that law at all.

And finally, Moses closes the parsha with a dramatic restatement of the terms of the covenant and an articulation of our free-will ability to choose rightly or wrongly:

"Behold, I have set before you today life and good, and death and evil... You shall choose life, so that you and your offspring will live..." (Deuteronomy 30:16–19)

If we choose wrongly, then we will be punished – with curse and with death. Now, we know – at least in some abstract sense – that the Torah operates according to a system of reward and punishment. But to hear Moses say, so baldly, that God will respond to our sins by cursing us, by killing us... it's hard to hear. And it's hard to reconcile it with the picture that many of us would like to have of a loving and compassionate God, a God who is like our Heavenly Parent... and that's not just a picture that we'd like to hold onto, it's a depiction which we find flushed out in many places throughout the Torah! So how are we supposed to understand these terrible curses?

Imu Shalev thinks that there's a clue lurking here in Parshat Nitzavim, a clue that can help us to view these curses in a whole new light. The clue is in that verse that we quoted just above:

Does that language sound familiar, Imu asks? Where else in the Torah have we come across these notions of "good" (tov) and "evil" (ra), of life (chayim) and death (mavet)?

These word pairings sort of bring you back to one of the earliest stories in the Torah – to the Garden of Eden, with its two trees: the Tree of Life, and the Tree of Knowledge of Good and Evil – which, if you ate from it, would lead to death.

Is Moses really harkening back to the Garden of Eden here in Parshat Nitzavim? If so, what does he mean to communicate to us? And how might that help us to make sense of these terrible punishments that our Creator threatens to bring to bear? Answers to those questions and more are in Imu's two-part video on Parshat Ki Tavo and Parshat Nitzavim: "How To Make Sense Of The Terrible Curses."