In Ki Tavo’s Torah reading, we learn about many laws pertaining to the land of Israel, specifically, the laws of tithing our produce. Then God promises us dark, sadistic curses if we fail Him. It's difficult to read – how could God be so cruel? 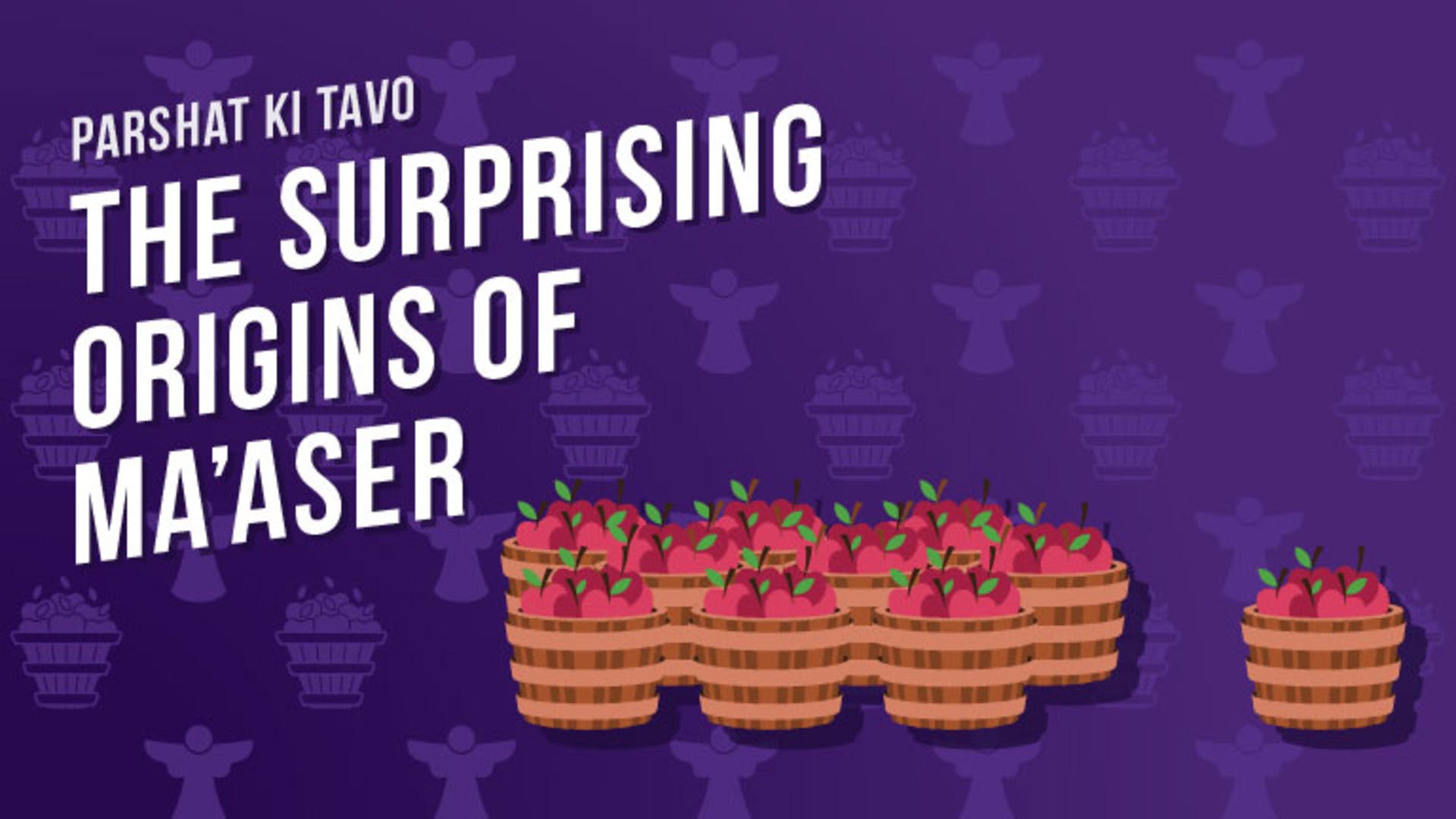 Where Does Tithing Come From In The Bible?

Ki Tavo describes for us the law of ma’aser, tithing, and the law of vidui ma’aser, the declaration of ma’aser. But why isn’t it enough to give ma’aser? Why the spectacle of the dramatic statement?
Watch Video

Printable Guide
Ki Tavo: How To Take Your Place In Jewish History

Parshat Ki Tavo opens with a discussion of two laws that will only go into effect when the children of Israel settle in the land. The first is the mitzvah of bikkurim, first fruits. We've heard about this idea before — that we should take the first of our produce and bring it to God – but here in Ki Tavo, we get some additional details. For one thing, we're meant to bring those fruits to the Temple in Jerusalem, physically handing them to the Kohen, the Priest. And when we do so, we're supposed to make a grand and very specific speech (and if the words of this speech sound familiar to you, that may be because they are from the Passover Haggadah – they are part of Maggid, where we quote verses from the Torah, and from Midrash, that tell the story of the Exodus from Egypt):

"An Aramean [sought to] destroy my forefather (alternate translation: 'My father was a wandering Aramean'), and he went down to Egypt and sojourned there with a small number of people, and there, he became a great, mighty, and numerous nation. And the Egyptians treated us cruelly and afflicted us, and they imposed hard labor upon us. So we cried out to the Lord, God of our fathers, and the Lord heard our voice and saw our affliction, our toil, and our oppression. And the Lord brought us out from Egypt with a strong hand and with an outstretched arm, with great awe, and with signs and wonders. And He brought us to this place, and He gave us this land, a land flowing with milk and honey. And now, behold, I have brought the first of the fruit of the ground which you, O Lord, have given to me." (Deuteronomy 26:5–10)

What is the meaning of the mitzvah of bikkurim and its accompanying speech? We seem to be testifying to the fact that many generations ago, God had promised Abraham and Isaac and Jacob that their descendants would get to inherit the land of Israel... and though it took hundreds of years and the experience of brutal slavery and many tribulations, they finally got there; the promise finally came true. So true, in fact, that descendants of Abraham, Isaac and Jacob will be able to plant seeds in that land, they will watch them grow, they will harvest the fruits, and they will carry the first of those fruits all the way to Jerusalem to testify before God: "See? We're here. Finally. Thank you. We're not slaves anymore. We're a free people sustaining ourselves in our own land." It's a beautiful gesture of appreciation and gratitude. For more on the mitzvah of bikkurim, see Rabbi Fohrman's video, "How To Take Your Place In Jewish History."

Right after the mitzvah of bikkurim, Parshat Ki Tavo discusses another mitzvah: one which also has to do with agriculture, and also applies only once the people settle in the land. It's the mitzvah of ma'aser, of giving tithes. Beyond bringing their bikkurim to the Temple, farmers in the land of Israel are supposed to separate out a portion of what they've grown and set it aside – to give to the Levi, or to the poor, or to bring it to Jerusalem where, unlike with bikkurim, they eat it themselves.

We already heard the basic laws of ma'aser back in Parshat Re'eh, but here we learn about an additional dimension: about the law of vidui ma'aser, the declaration of ma'aser. The law is that every three years, you are meant to take a sort of inventory of what you've grown to make sure that you've done the mitzvah of ma'aser properly, that you've set aside what you were supposed to. If you haven't, this is your time to fix it.

And then you stand up and make this strange declaration before God:

"I have removed the holy [portion] from the house, and I have also given it to the Levite, the stranger, the orphan, and the widow, according to all Your commandments that You commanded me; I have not transgressed Your commandments, nor have I forgotten [them]. I did not eat any of it [second tithe] while in my mourning, nor did I consume any of it while unclean; neither did I use any of it for the dead. I obeyed the Lord, my God; I did according to all that You commanded me. Look down from Your holy dwelling, from the heavens, and bless Your people Israel, and the ground which You have given to us, as You swore to our forefathers a land flowing with milk and honey." (Deuteronomy 26:13–15)

The question is... what's with this strange mitzvah of vidui ma'aser, and what's with the grand speech? Do we do this with any other mitzvah in the Torah? Do we set aside time to think back on everything that we've eaten over the past three years and make sure that it was kosher? And then do we say before God: "God, everything we ate was kosher! Really it was! Those crab sticks... they were imitation crab, not the real thing! I would never transgress your laws. So please bless me."?

There happens to be a story involving ma’aser, a story from much earlier in the Torah, from Parshat Vayeitzei – about one of our forefathers, Jacob, who made a vow to give ma’aser to God. If you read that story, it may actually help to explain why it’s so important that we make this grand speech, to declare that we’ve done the mitzvah of ma’aser. Rivky Stern examines that story in her latest video, "The Surprising Origins of Ma'aser," and shows how it might add new depth to our understanding of these laws.

At this point, Parshat Ki Tavo switches gears and begins to discuss the blessings that will come to those who keep God's commandments and the curses that will come to those who don't. We learn the details of this elaborate ritual whereby the people are supposed to engrave the entire Torah upon stones and set the stones atop these two mountains, Mount Gerizim and Mount Ebal, and to actually proclaim out loud the aforementioned blessings and curses. And... we have an awful lot of questions about this whole procedure.

For one thing, what's so special about these mountains, Mount Gerizim and Mount Ebal? And why must the whole ritual be so public? Isn't it enough for God to simply say: "If you follow Me, you'll be blessed, and if not, you'll be cursed"? In a podcast conversation, "What Are Blessings And Curses, Really?," Daniel Loewenstein and Beth Lesch grapple with these questions, exploring the gematria (numerology), grammar and topography hidden in Ki Tavo to understand what blessings and curses really mean.

And another question looms even larger. From this overview, you may have noticed that Parshat Ki Tavo really breaks neatly into two main sections. The first section is about the laws of bikkurim and ma'aser, and the second section is about the blessings and the curses. How do these sections fit together? Is there a common thread that unifies our parsha? Or do we have two random sections that were just "stuck together" for no good reason? In a two-part video "What Does The Bible Say About Happiness?," Rabbi Fohrman starts by asking this question... and suggests that there is a common thread that unifies the parsha — and it is nothing less than an instruction manual for how to find true happiness. Check it out here.

And finally, the question on Parshat Ki Tavo that looms largest of all. The verses that describe the blessings that will come to us if we follow God's laws – they make for very pleasant reading. We'll have many children, our crops and livestock will grow abundantly, we'll always have food to eat, our enemies will flee from before us, other people will fear us, etc. But when you get to the part about the curses... it's far from pleasant. We'll be plagued by pestilence, thirst, fever, boils and oozing sores, and fatal illnesses for which there is no cure. Birds will devour our corpses. We will suffer from insanity, blindness, and confusion. Our children will be taken captive, never to be returned to us. And that's not the half of it.

You read these verses and you wonder: How could God be so cruel to us? We're not asking why the Torah brings up reward and punishment. But why these sadistic curses, why so dark, so horrific? Is this really how God will punish us? Doesn't it seem like a little bit... much? Imu Shalev grapples with these important questions in his two-part video, "How To Make Sense Of The Terrible Curses."

Interested in learning about the upcoming Parshiyot? Check out Aleph Beta’s Parsha pages on Parshat Nitzavim, Vayelech and Haazinu.