Moses composes a song to the Jewish people on the last day of his life. Moses goes to Mount Nebo to look at the land of Israel before passing away at the age of 120. 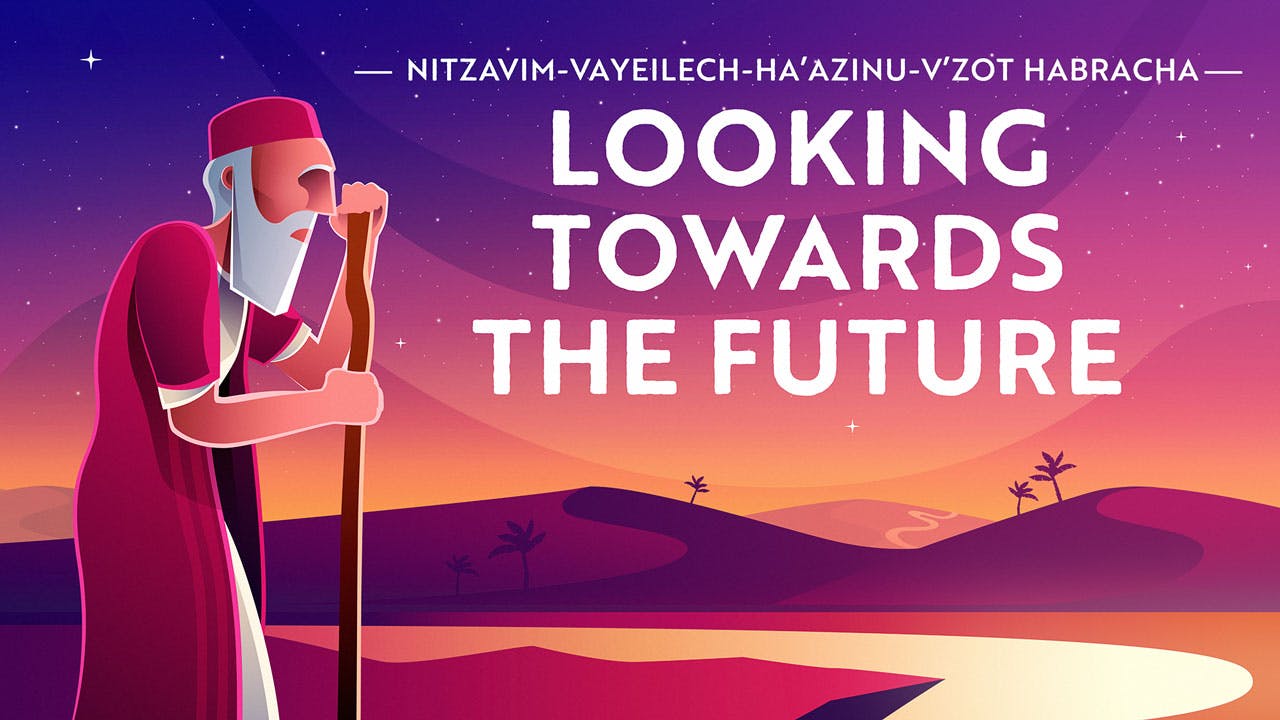 Shirat Ha'azinu: The Song Of Moses

In this video, the first of a three-part series, we ask about God's odd prophecy to Moses at the end of the Torah. As Moses is about to die, why does God tell him about how the Israelites will ruin everything? Rabbi Fohrman hints that Moses has the power to help us get out of a vicious cycle.
Watch Video

Parshat Ha'azinu, the second to last parsha in the entire Five Books of Moses, consists of only one chapter. And almost all of it is a single shira, a poetic song that God dictated to Moses (on the final day of Moses' life) and instructed him to teach to the people.

Now, this is a little strange. It's one thing for God to teach laws to Moses, but a song? What is the meaning of this odd song? And why is it so important to God that the people hear it?

In order to answer that question, you really have to look back into last week's parsha, Parshat Vayeilech, and see what God Himself says about the song:

"'And now, write for yourselves this song, and teach it to the Children of Israel. Place it into their mouths, in order that this song will be for Me as a witness for the children of Israel. When I bring them to the land which I have sworn to their forefathers [to give them], a land flowing with milk and honey, they will eat and be satisfied, and live on the fat [of the land]. Then, they will turn to other deities and serve them, provoking Me and violating My covenant. And it will be, when they will encounter many evils and troubles, this song will bear witness against them, for it will not be forgotten from the mouth of their offspring. For I know their inclination what they [are planning] to do today, [even] before I bring them in to the land which I have sworn [to give them].' And Moses wrote this song on that day, and taught it to the children of Israel." (Deuteronomy 31:19–22)

God seems to be saying to Moses: "Look, Moses, despite your best efforts, when you die, this people is going to sin. They're going to violate my Torah. But they're always going to remember this song, and this song will... bear witness against them."

It's unclear what God means when He says that the song will bear witness against them. Does He mean that when the people sin, He'll point to the song and say: "You should have known better! Now I'm going to punish you?" That's one possibility.

But there's another possibility: that this song, somehow, will protect the people from sin. That when they come close to violating God's law, when they are tempted to stray, they will remember the words of the song, and the song will remind them of some crucial lesson, and it will help them to turn back to God. That Shirat Ha'azinu, the song of Ha'azinu, will help repair the broken relationship between God and his people. That it's an antidote.

Which one of these interpretations is right? What do the words of the song itself suggest? Shirat Ha'azinu is poetic and difficult to understand, but when studied carefully, it tells a striking story. In a three-part video series on Nitzavim-Vayeilech, Ha'azinu, and V'zot HaBracha, "Looking Towards The Future," Rabbi Fohrman takes a close look at the text of this beautiful and mysterious song, probing its language for answers.

Not only does he aim to make accessible the poetry of Shirat Ha'azinu, but also to read it as an instruction manual for how we, even in our generation, can strengthen our relationship with God.

"Looking Towards The Future" is a great destination to get an overview of what the song of Ha'azinu is all about – and if you find yourself hungering for more analysis of the language of this song, look no further than "Is This The Song of Doom?," a podcast conversation in which Daniel Loewenstein and Ami Silver wonder about the strange opening of the song:

"Listen, O heavens, and I will speak! And let the earth hear the words of my mouth! My lesson will drip like rain; my word will flow like dew..." (Deuteronomy 32:1-2)

"My lesson will drip like rain"? What, exactly, does that mean? And why is this the introduction to this song? After this cryptic introduction, the song of Ha'azinu goes on to discuss other themes, among them:

But the emphasis throughout is on the idea that God will never completely destroy His people, that He brings suffering upon them in order to stir them to return to Him, and that He will never abandon them.

At the end of the song, Moses instructs the people:

"Set your hearts to all of the words which I bear witness for you this day, so that you may command your children to observe to do all the words of this Torah. For it is not an empty thing for you, for it is your life, and through this thing, you will lengthen your days upon the land to which you are crossing over the Jordan, to possess it." (Deuteronomy 32:46–47)

And in its closing verses, Parshat Ha'azinu has a bit more to tell us – about what happened during Moses' final day of life. God commands him to walk up to the top of Mount Nebo, where he will be able to see the Promised Land... but he'll never actually enter it, because he will die there atop that mountain.

These verses are among the most poignant in the entire Torah, leaving us to wonder not only why God saw fit to preclude this holiest of men from enjoying Israel along with his people, but also to wonder about what this all felt like, from Moses' perspective. What was it like to walk those slow steps to the top of the mountain, knowing he would never come down alive? What thoughts crossed through his mind when he looked out over the land? What were his hopes for his people in that moment, and his fears?

The verses here are brief; Parshat Ha'azinu doesn't seem to give us answers to those questions. But Rabbi Fohrman has a theory that answers can be found elsewhere in the Torah in a most surprising place. Psalm 90, Rabbi Fohrman argues, is a commentary on the life of Moses, one which opens up a window for us into Moses' personal experience. He presents his theory in his three-part video series, "Moses’s Psalm: A Paradigm Of God Answering Prayer."