Noah builds an ark! God floods the world, and there’s a Tower of Babel. 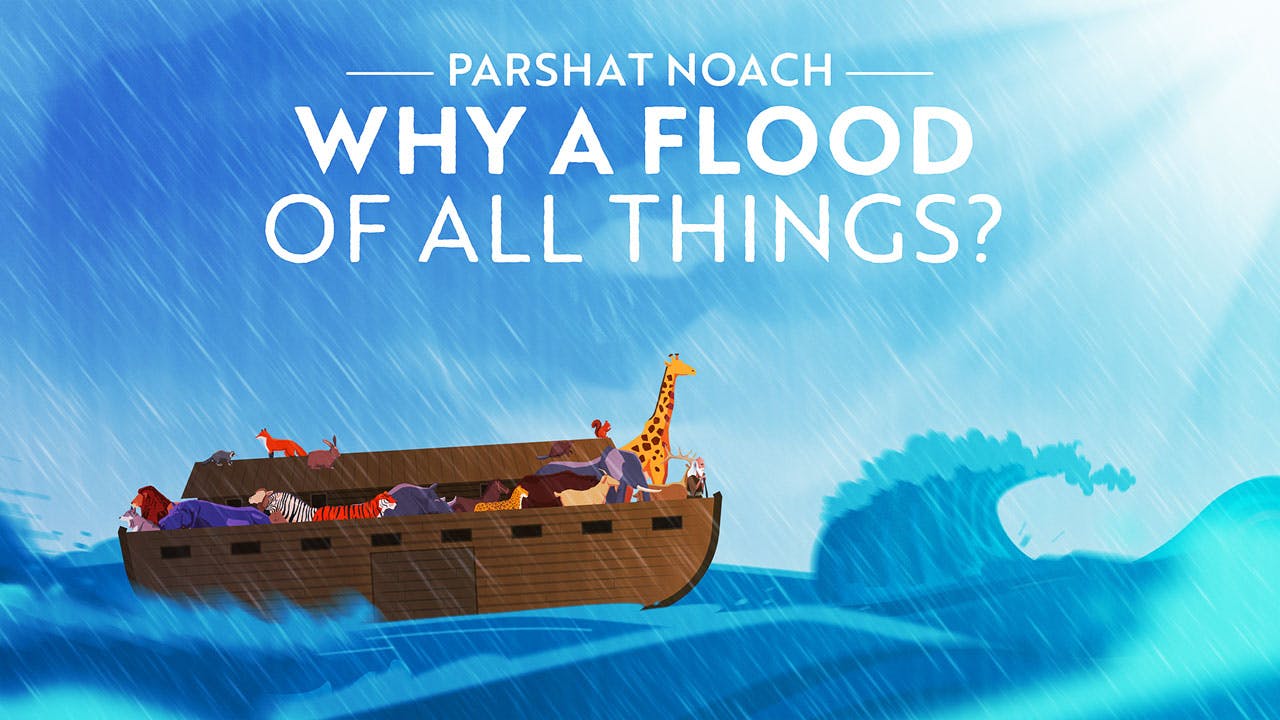 The Connection Between Noah And The Story Of Creation

Okay, God decided to destroy the world. But there are lots of ways to destroy a world: why a flood?
Watch Video

Printable Guide
Noach: Why Did God Destroy The World?

PREMIUM
Printable Guide
Noach: Why Aren't Dinosaurs In The Torah?

Parshat Noach opens with a description of Noah, who is described as “a righteous man in his days.” (Mysterious!) God has decided to destroy the world, because of the wickedness of mankind, and so issues a warning to Noah. God tells Noah to build an ark to save himself, his family, and the animals. Noah throws himself into this project, and the biblical text gives us columns and columns of the construction plans. (Spoiler alert: there’s a lot of “pitch” involved.)

Noah finishes his ark just in time for the waters to begin. The waters rain for 40 days and 40 nights, and then they swell for another 150 days before they begin to recede, which takes another 40 days. After all of this, Noah begins to search for dry land. He sends out birds – first a raven, and then two doves – and when the second dove doesn’t return, Noah understands that the land is dry. God then instructs Noah and his family to emerge from the ark, and they do, celebrating with animal offerings. God then promises the people that He will never again destroy the world – with the rainbow as a sign of the covenant.

But, after all the excitement, trouble begins again. Noah plants a vineyard and becomes intoxicated. In his drunken and vulnerable state, one of Noah’s three sons, Ham, makes a mockery of him, while the others – Shem and Japheth – step in to protect his dignity. Noah curses Ham’s son, Canaan, and prays that God will bless his other two sons, Shem and Japheth. The parsha then gives us a detailed genealogy of the three sons, which brings us all the way to the episode of the Tower of Babel.

The people of this budding society decide to build a city called Babel, with a tower reaching to the heavens, in order to “make a name” for themselves. God is not pleased with this and confuses the people’s speech so that they cannot communicate, and therefore cannot continue building their tower.

The parsha ends with the introduction of a new character, named Abram. (Another spoiler: he will become pretty important and will eventually be known as Abraham!)

See what happens next week in Parshat Lech Lecha here!