The final book of the five books of Moses, begins with Moses speaking to the Jewish people. He encourages them to continue to Canaan without him. 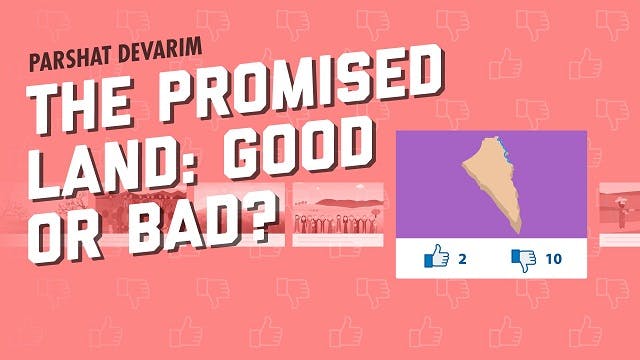 The True Sin Of Israel Rejecting The Promised Land

Parshat Devarim recounts the sin of the spies. If you’ve ever wondered what was so bad about what the spies did, and why they merited such a harsh punishment, this is for you.
Watch Video

Printable Guide
Devarim: What Does It Mean To Have Faith?

PREMIUM
Printable Guide
Devarim: What Did Moses Do Wrong? Part 1

Parshat Devarim inaugurates the Book of Deuteronomy, the fifth book of the Torah. When you start to read the Book of Deuteronomy, you immediately notice that this is a unique book, written in a style that is quite different from what we've encountered up until now in Genesis, Exodus, Leviticus, or Numbers. Essentially the entire book, all 30+ chapters, is in the form of a speech given by Moses to the Israelites as they stand in the land on the eastern bank of the Jordan, about to cross into the Promised Land.

Moses recounts to them various stories from their history and reviews certain laws. But his review isn't comprehensive (i.e. Moses doesn't talk about every story or every law), and what's more, there are noticeable differences between the way that many stories/laws were first recounted and the way that Moses now describes them. (We're hardly the first readers of the Torah to notice these discrepancies – they have been the object of curious study by commentators for millennia – but we do get into the act.) For example, Rabbi Fohrman's video on "What Did Moses Do Wrong?" starts off by noticing that the reason given in Parshat Devarim for why Moses can't enter the land of Israel is, seemingly, different from the reason given in Parshat Chukat, back in the Book of Numbers. In one case, the reason is because Moses hit the rock. In another, it's because of the sin of the spies. So what is a reader of the Bible to make of that? Are there "two" separate reasons that somehow relate to one another – and if so, how? Or are these two separate reasons really one?

In the course of answering that question, Rabbi Fohrman delves into the poignancy and complexity behind God's decree against Moses, tackling a question that so many people, for so many generations, have found as vexing as it is upsetting: How could it be that the greatest leader that the Jewish people have ever known, this prophet who spoke face-to-face, so to speak, with God, is barred from entering the Promised Land? In the modern day, when a visit to Israel is just a plane ride away, this question is perhaps even more unsettling. Why should we merit this incredible privilege that Moses was denied? If that question bothers you, then "What Did Moses Do Wrong?" is an excellent starting point. And if, after watching that, you're seeking a deeper dive, then you are encouraged to check out our seven-part Premium audio series, "Why Couldn't Moses Enter the Land?"

Anyway, the decree against Moses is merely one detail from this parsha — and one example of what it looks like to compare a story from Deuteronomy to the "original" story from earlier in the Torah — but it's not where Parshat Devarim begins.

The parsha begins with Moses beginning to recount some of the stories from the Israelites' 40 years in the desert, a "greatest hits," if you will. He talks about his request to God to appoint intermediate judges (to help him shoulder the burden of leading the people), the saga and sin of the spies, the nation's avoidance of the land of Seir and Moav, their early defeat by the Emorites, their negotiations with Sichon and other kingdoms — asking for permission to pass through their land, and the granting of lands on the eastern bank of the Jordan to the tribes of Reuben (Reuven) and Gad.

Now... you'd be forgiven for thinking that it's not obvious why each of these stories is important enough to make the cut, and why other – seemingly more important stories — are left out of Moses' recap (we're thinking about the revelation at Sinai, the Golden Calf, and Korach's rebellion, for starters). Imu and David notice and address that question in their video, "Finding Inspiration From Our Past."

With Moses spending a great many verses in this parsha remembering the sin of the spies, we find that he isn't the only person in Parshat Devarim who is somehow rebuked for his behavior. As he recalls that sin and the way that the people reacted to the spies' evil report, he accuses the people of not having had faith. Now, let's think about that accusation for a minute. No one is arguing that the people were heroes in that story – they were so discouraged by the spies' evil report that they proposed going back to Egypt! But to accuse them of not having faith in God... isn't that a strange thing for Moses to say?

We're talking about the generation that received Manna from heaven, experienced the revelation at Mount Sinai, saw the 10 plagues, and saw the sea split. Does Moses really mean to say that they didn't believe in God? That they somehow doubted God's existence? If so, who sent them the Manna? Who made the sea split? It's hard to make sense of that, and it's enough to make you wonder: maybe "faith in God" isn't what we think it is. Maybe, when Moses talks about having "faith in God," it's not about whether you believe in God – that is to say, whether you believe that God exists. Maybe... it's about something else. What is that something else? What was at the heart of Moses' accusation? What does it mean to have faith in God? That is the subject of Rabbi Fohrman's video, "What Is Emunah? The Israelites' Struggle With Faith."

And for more on what was so egregious, so bad, about the sin of the spies, that God decided to bar that generation from entering the land, see "The Promised Land: Good or Bad?"