Miriam and Aaron die. The Jews complain that they are thirsty. Moses, instead of speaking to the rock, hits it and angers God. 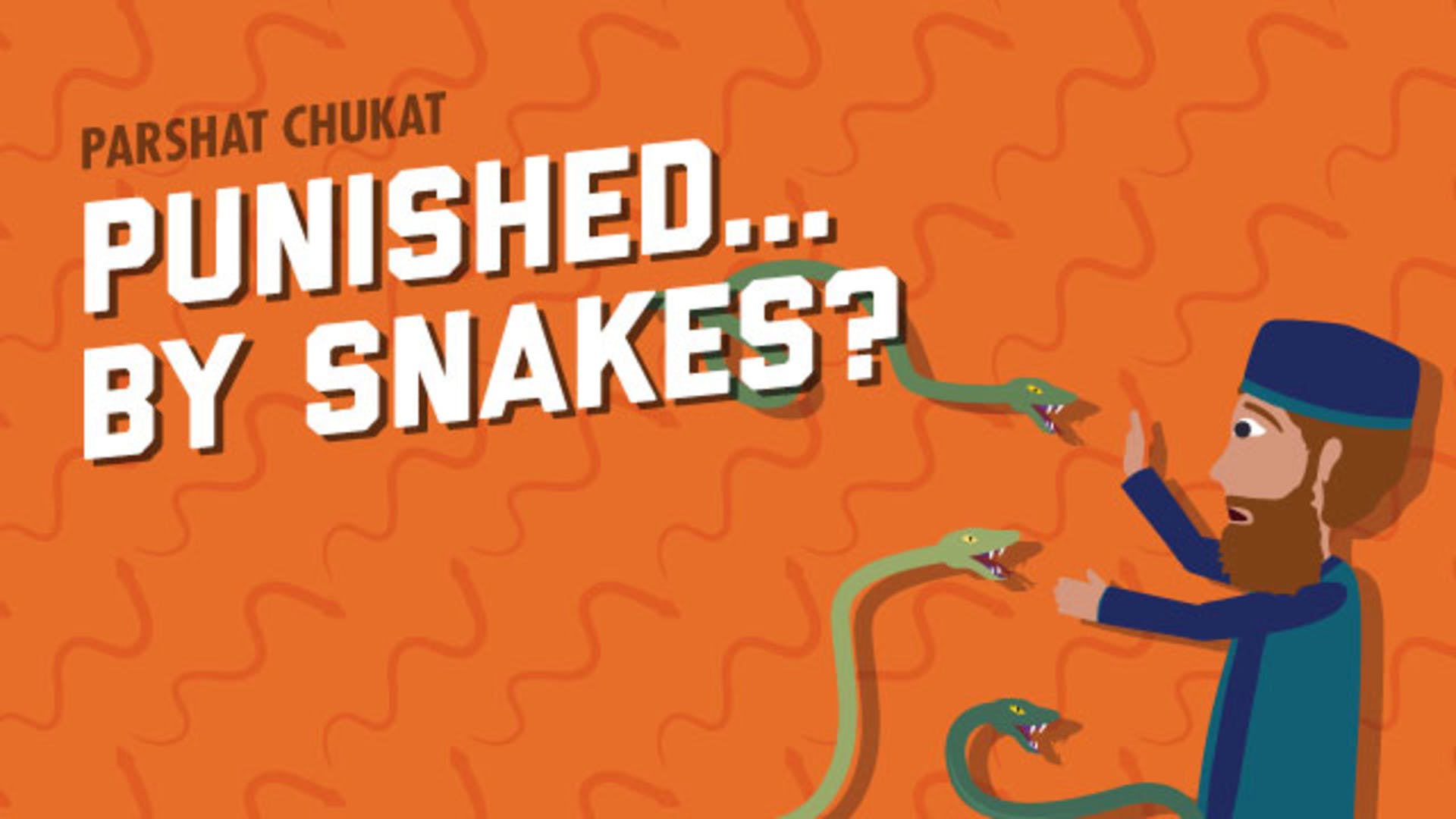 The Lesson Behind Moses And The Fiery Serpents

Crime: Complaining about food. Punishment: Attacked by snakes. Sound extreme? Sound random? It's not. Find out how here.
Watch Video

Printable Guide
Chukat: Was Hitting the Rock So Horrible?

PREMIUM
Printable Guide
Chukat: Why Did Moses Hit The Rock?

Parshat Chukat continues to tell the tale of the Israelites journeying through the desert to the Promised Land, and while the parsha is chock-full of stories, it opens not with a story but with a law: the law of the parah adumah, the "red heifer." What is the law of the red heifer (female cow) and why is it important? As the Torah explains, the red heifer is used to "purify" someone who has become "impure." A person can become impure through a range of possible behaviors (e.g. giving birth, having a period, touching the carcass of a non-kosher animal, coming into contact with a human corpse, etc.) and once a person is impure, he/she can't participate in certain spiritual and communal activities, like entering the grounds of the Temple, offering or eating a sacrifice, or in some cases, even dwelling in the camp with the rest of the nation.

Earlier sections of the Torah (notably Parshat Metzora in the Book of Leviticus) laid out a procedure for how impure people could change their status, but here, in Parshat Chukat in the Book of Numbers, we learn about a very specific case: about the person who became impure because he/she came into contact with a human corpse. That person's only means of becoming pure is to follow the procedure of the red heifer: to identify a perfectly unblemished and wholly red female cow, who never wore a yoke around her neck, and to slaughter and burn it (along with some odd ingredients: cedar wood, hyssop, crimson wool), then drip water onto its ashes and sprinkle that mixture onto the affected individual. (Now that you've heard the law, are you curious to understand the symbolism behind this strange ritual? The Parsha Lab podcast, "Why Do We Need A Red Heifer?," addresses that question in an unexpected way.)

After the law of the red heifer comes perhaps one of the most important stories in all of the Israelites' travels, a sure turning point in the Book of Numbers. Miriam, the sister of Moses, dies, and immediately afterwards, the people complain that they are thirsty. God instructs Moses to provide water for the people by speaking to a rock... and Moses follows God's instruction with one small change: instead of Moses speaking to the rock, he strikes it with his staff. He's successful in drawing water from the rock, miraculously – but God expresses His severe displeasure with Moses. God decrees a punishment that will haunt Moses for the rest of his life: that he will not be the one to lead the people into the Promised Land, the land of Israel.

There are so many questions to be asked about this story; it's hard to know where to begin. Why didn't Moses just listen to God? Why did God respond with such a harsh punishment? And does Miriam's death, at the very start of the story, have anything to do with this?

In two videos on Parshat Chukat, Rabbi Fohrman asks and answers these questions in surprising ways. In "Was Hitting the Rock So Horrible?" he tackles the question of what was so bad about hitting the rock instead of speaking to it, attempting to put forth a satisfying question to this upsetting question. And in "Why Did Moses Hit The Rock?", he invites us into Moses' thought-process, putting forth a theory as to what possessed Moses to hit the rock instead of speaking to it... and what that might possibly have to do with the death of his sister Miriam immediately prior.

But there's one more question about this story that demands to be asked — not about Moses' response to the water crisis, not about his fate, but about the complaints of the people that precipitated it all. The Torah tells us that: "The congregation had no water; so they assembled against Moses and Aaron; the people quarreled with Moses." That sounds pretty harsh. Moses has ably and faithfully taken care of them for the past 39 years in the desert, their every need has been met — water, manna, military protection — and now, they find themselves without water... and how do they react?

It would be one thing if they said, "Excuse me, Moses, we just noticed that there's no water and we're getting worried." But to assemble against Moses and Aaron, to quarrel with them? And that's not the worst of it. Look at what they say: "Why have you taken us out of Egypt to bring us to this evil place?" It's nuts! They were miraculously redeemed from bondage, and now they have the ingratitude to say such a thing? How can they continue to complain after everything that Moses — and God, for that matter — has done for them? Imu Shalev and David Block tackle that baffling question in their video, "A Turning Point In Israel's Relationship With God."

And Parshat Chukat is far from over. In the verses that follow, we read about the death of Aaron, Moses' other sibling, atop Mount Hor, about morecomplaining from the people (this time, God responds by sending poisonous snakes their way — to understand that story, check out Daniel Loewenstein's video: Punished... By Snakes?), and about their negotiations — diplomatic and military — with the nearby nations as they attempt to make their way to Israel. The Amalekites (disguised as Canaanites) launch an unsuccessful attack, the king of Edom refuses their peaceful request to travel through his lands, the kings Sichon and Og instigate an violent attack and are routed, their lands conquered, and the Israelites proceed to the eastern bank of the Jordan River, poised to soon cross over and finally enter Israel.