In this parsha, Balak pays Balaam to curse the Jewish people. Balaam hits his donkey when the donkey stops moving forward. The donkey tells Balaam not to curse the Jews, so Balaam blesses them instead. 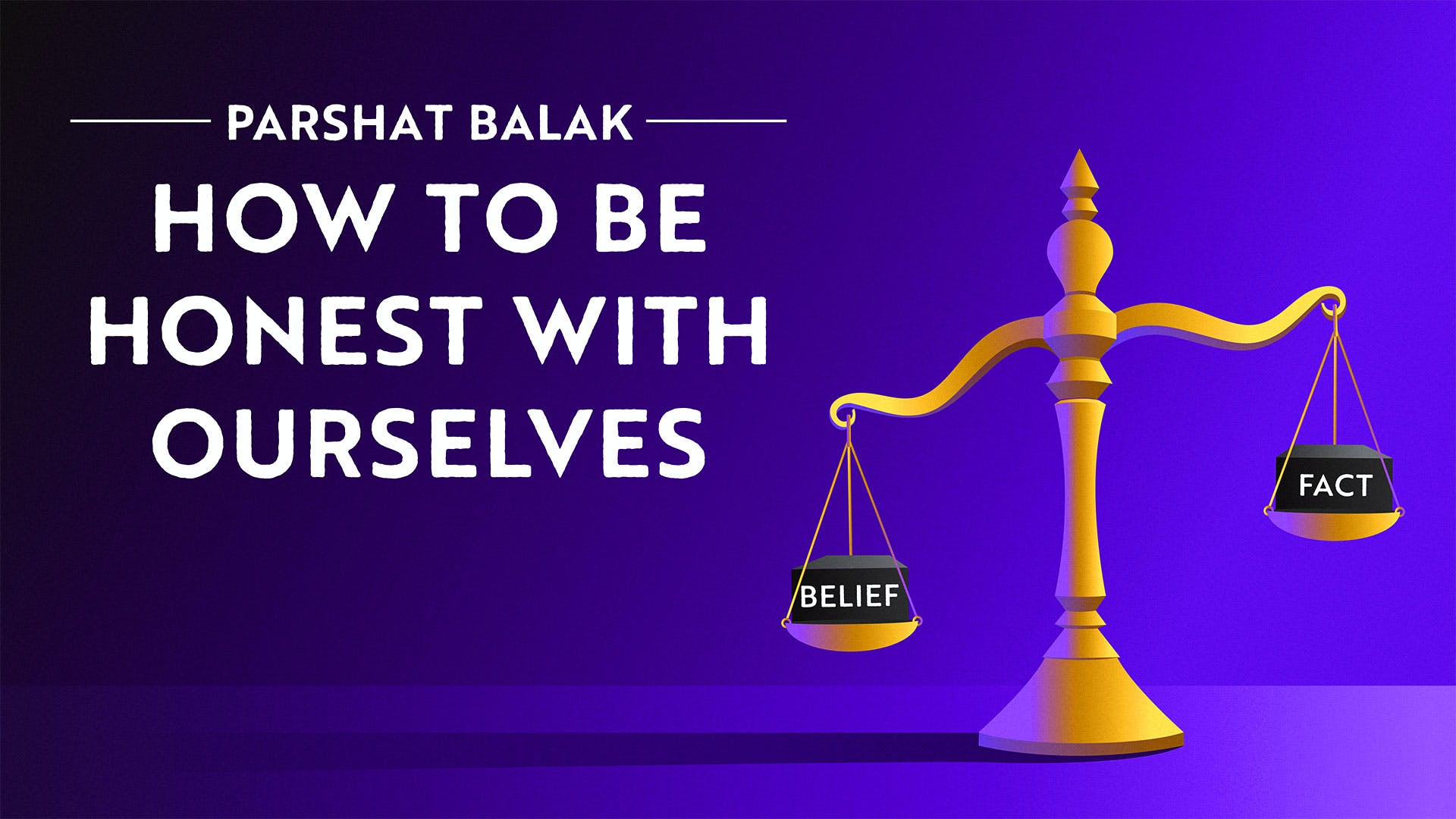 A Lesson Of Fact And Fiction From King Balak Of Moab

Are we rational? Do we use evidence and data to make decisions? See how Parshat Balak addresses that question, head-on.
Watch Video

PREMIUM
Printable Guide
Balak: What Is Israel's Purpose In The World?

The bulk of Parshat Balak deals with a single story: the drama of Balak as he hires Bilaam (conventionally written in English as "Balaam") to try to curse the Israelites. Here's how the plot goes down.

Balak, the king of Moab, takes notice of the Israelites as they wander in the desert close to his people's territory. You see, the Israelites recently enjoyed a stunning victory against two neighboring kingdoms of Sichon and Og (those are the names of the kings, respectively) — and Balak is intimidated. He doesn't want what happened to those other kingdoms to happen to Moab, his people.

So he makes a plan. He seems to know that taking on the Israelites in military battle is a bad idea, so he resorts to another tactic: spiritual warfare. And by spiritual warfare, we mean that Balak seeks out a local prophet named Bilaam and tries to hire him as a mercenary of sorts to curse the Israelites. Apparently, Bilaam has a special knack for cursing people. (You didn't know that there was such a thing as a non-Israelite prophet? Well, now you know. And as the story proceeds, you'll see that Bilaam really does seem to be a prophet — the Almighty God really does talk to him — although his righteousness is up for debate.)

At first, Bilaam expresses reluctance to work for Balak. Before saying yes, he wants to know if God approves of the mission. God indeed comes to him that night and makes clear His Divine disapproval: "You shall not go with them! You shall not curse the people because they are blessed." Bilaam conveys his regrets to Balak's messengers, but Balak doesn't want to take no for an answer. He is persistent, and after some back and forth, Bilaam ultimately concedes — and God seems to give a perfunctory sort of approval: that Bilaam can go but should speak only the words that God puts in his mouth.

You have to ask: Did God really want Bilaam to go on this mission? And did Bilaam truly care what God thought, or was he just going to do his own thing anyway, just going through the pious motions? Rabbi Fohrman explores this question and paints a rich and textured portrait of Bilaam in his video.

The question about whether God really wanted Bilaam to go on this mission or not seems to get answered pretty soon, for we read that when Bilaam set out on his journey, God placed in his way an angel bearing a sword. Bilaam nearly misses the message entirely, and arrives at his destination having been reminded, again, only to speak the words that God puts in his mouth.

When it comes time for Bilaam to actually open up his mouth and curse the Israelites, as he was commanded by Balak to do, a curious thing happens: instead of saying a curse, he says a blessing instead. It seems that God "put" these words in Bilaam's mouth. Balak is enraged, but a second and third attempt yield the same result. (By the way, this is where the "Ma tovu" prayer comes from — "How beautiful are your tents, o Jacob, your dwelling places, O Israel." It's a prayer that may be familiar to some from the synagogue service. It is just one of the many wonderful things that Bilaam says about the people.) It seems that what God said the very first time is true: "You can't curse the people because they are blessed."

One of the most curious things about the whole Bilaam story is that our Sages, the Rabbis of the Talmud, compare Bilaam to Abraham. You might be thinking, why would you ever think to compare these two characters? Rabbi Fohrman asks and answers this question, showing that there's much more to this parallel than meets the eye — and that it has much to teach us about the nature of Abraham's mission in this world. See his videos, "Balaam, Prophet For Hire?" and "What Is Israel's Purpose In The World?" for more on that idea.

With that ends the saga of Balak and Bilaam, but the parsha isn't over yet. There's one more story, or at least a half story: the story of the Moabite and Midianite women who attempt to seduce the Israelites. They tempted the Israelites to engage in avodah zarah, idol worship, unsurprisingly invoking an angry plague from God.

In the midst of this plague, one particular Israelite, who goes unnamed by the Torah, is described as doing something shockingly provocative: he "brought the Midianite woman to his brothers, before the eyes of Moses and before the eyes of the entire congregation of the children of Israel." One member of the congregation who sees this stands up and takes immediate (and violent) action: he kills both the man and the Midianite woman, driving a spear through their bodies. That man is none other than Pinchas, a grandson of Aaron (the High Priest) — whose namesake parsha comes right after Parshat Balak. In the videos on Parshat Pinchas, we grapple with the questions that are raised by this account: Did Pinchas do the right thing? When is it good to act with zeal on behalf on God, and when it is horribly misinformed? See Rabbi Fohrman's video, "What Does It Mean To Be Zealous For God?," for a discussion of that very question.