The five daughters of Zelophehad plead to Moses to inherit their father's portion. Joshua is named the next leader after Moses. 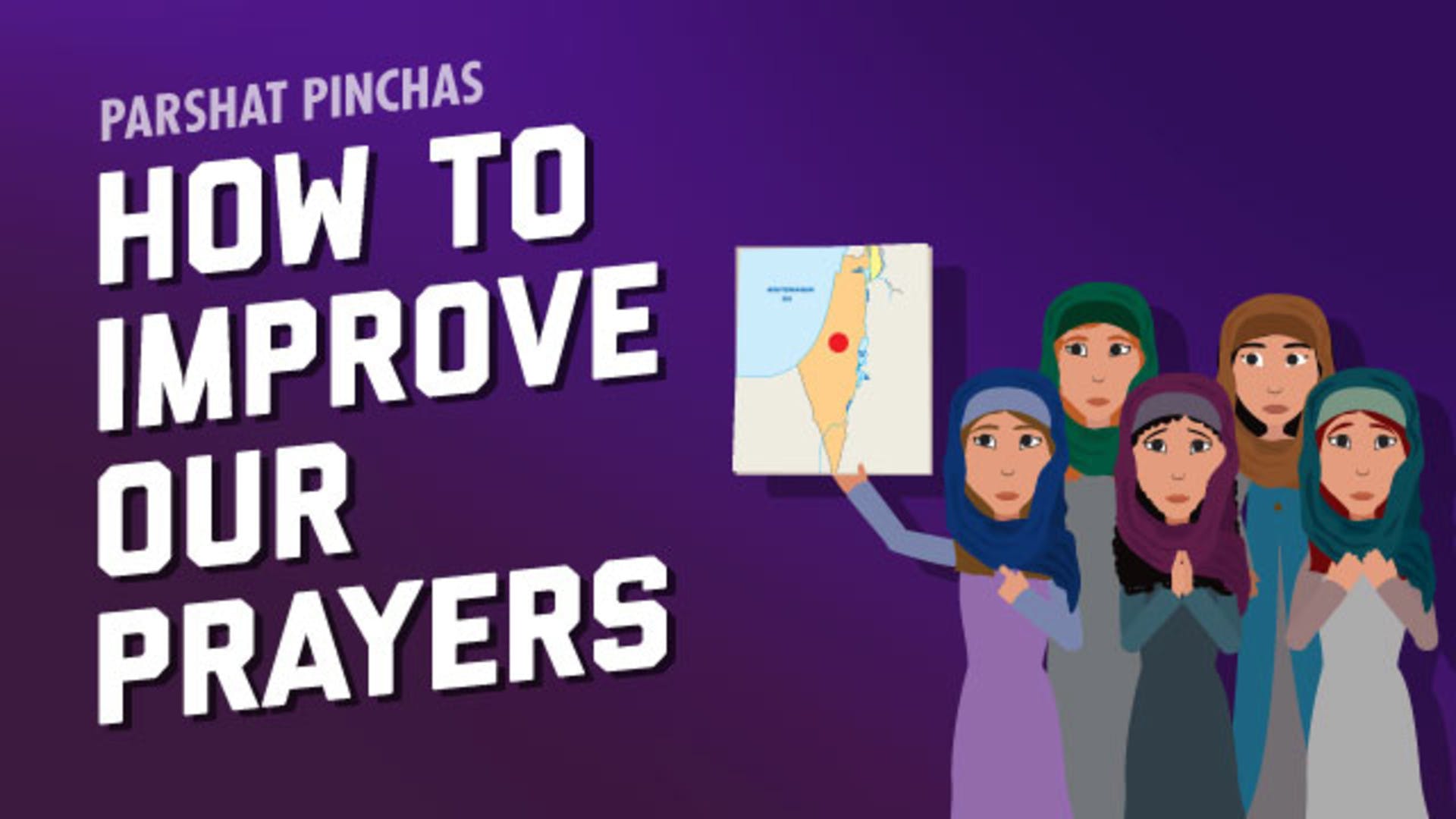 Lessons From The Five Daughters Of Zelophehad

Do you know the best way to ask for something from God? The daughters of Zelophehad do. Click here to learn the secret of their success.
Watch Video

Printable Guide
Pinchas: What Does It Mean To Be Zealous For God?

Parshat Pinchas picks up in the middle of a story that had begun in the prior parsha – Parshat Balak – the story of Pinchas (in English: "Phineas"), the grandson of Aaron, who just committed a shocking act of zealotry. When Pinchas saw an Israelite man who was publicly consorting with a Midianite princess, he killed them both, putting a spear through their hearts. When we read the beginning of that story in Parshat Balak, we find no commentary about whether Pinchas did a good thing or a bad thing. Did Aaron approve? Did God approve? Was Pinchas to be condemned as a violent murderer, or lauded for defending the honor of God? Well, in Parshat Pinchas we find our answer.

God approves – wholeheartedly – of Pinchas' act and gives him a great reward: the promise of kehunah, priesthood, for him and all of his descendants.

But this leaves us with some uncomfortable questions. Does that mean that the Torah encourages zealotry? Are we supposed to act like Pinchas did? And when we see modern-day zealots who engage in violence to achieve their aims, are they to be lauded too? Rabbi Fohrman grapples with these questions in his video, "What Does It Mean To Be Zealous For God?" There, he tries to understand what it was about Pinchas' act that God liked so much, and to draw a much-needed line between "good" acts of zealotry and bad ones.

After the saga of Pinchas concludes, the Torah goes on to tell us about another census of the people, this one conducted by Elazar (Pinchas' father, by the way). Totals are given for each of the tribes, though just as with the census earlier in the Book of Numbers, the tribe of Levi is not counted with the rest of the nation. Then Levi is then counted separately and Moshe assigns portions of the land of Israel to each tribe, based on its count.

You may find yourself wondering: Why is it so important to count the people? I can see counting them once, but why do it over and over again? Is there some more lofty, spiritual significance to the notion of "counting" – and if so, what is it? This is the question that Rabbi Fohrman relates to in his video on Parshat Bamidbar, “Why We Count.”

In the course of Moshe assigning portions of land to each tribe, and to each family within each tribe, a fascinating drama ensues. The five daughters of this one particular man, Zelophehad, approach Moses and contest the laws of land inheritance. They explain to Moses that their father is dead. When someone dies, his land is to be passed to the oldest son — but Zelophehad had no sons, only daughters. Shouldn't his daughters be able to inherit his plot? Shouldn't his land remain in his immediate family?

Moses brings their petition before God, and shockingly, God grants it. God revises the laws of inheritance, not merely making an exception for the daughters of Zelophehad, but decreeing that, for all future generations, the daughters of son-less fathers will be able to inherit. Why did God take so positively to this request? Daniel Loewenstein asks and answers that question in his video "Lessons From The Five Daughters Of Zelophehad," and actually shows us how the daughters of Zelophehad can help us to better formulate our own prayers.

This is in contrast to other Biblical and Tannaic stories in which people approached God with their appeals and were rejected. For a more in-depth discussion on how to speak to God about life challenges or hardships, Rabbi David Fohrman addresses this and more in his Premium course, “Is it Kosher to Argue with God.”

What we read about next is a short but dramatic and poignant story: God tells Moses to ascend to the top of a mountain that overlooks the Promised Land — and explains that Moses will die before being able to enter. This is Moses' punishment for having disobeyed God back in Parshat Chukat, for having hit the rock instead of speaking to it. (For more on that story, see "Was Hitting the Rock So Horrible?" and "Why Did Moses Hit The Rock?") Moses pleads with God to appoint a successor to lead the people in his stead, and God identifies Joshua (Yehoshua Bin Nun) as the man for the job.

Parshat Pinchas concludes with a review of the laws of communal sacrifices: the morning and afternoon tamid offerings, as well as those offered on Shabbat, Rosh Chodesh (the start of the new month) and the Jewish holidays.

By the way, what do all of the seemingly miscellaneous ideas in this parsha have in common? What's the thread that ties them together? David Block gives his answer in "What Is True Leadership?"