The final book of Genesis, Jacob blesses his sons before dying. Joseph affirms that he will not take revenge on his brothers after Jacob passes away. Jacob makes Joseph promise him that he will bury him in Canaan. 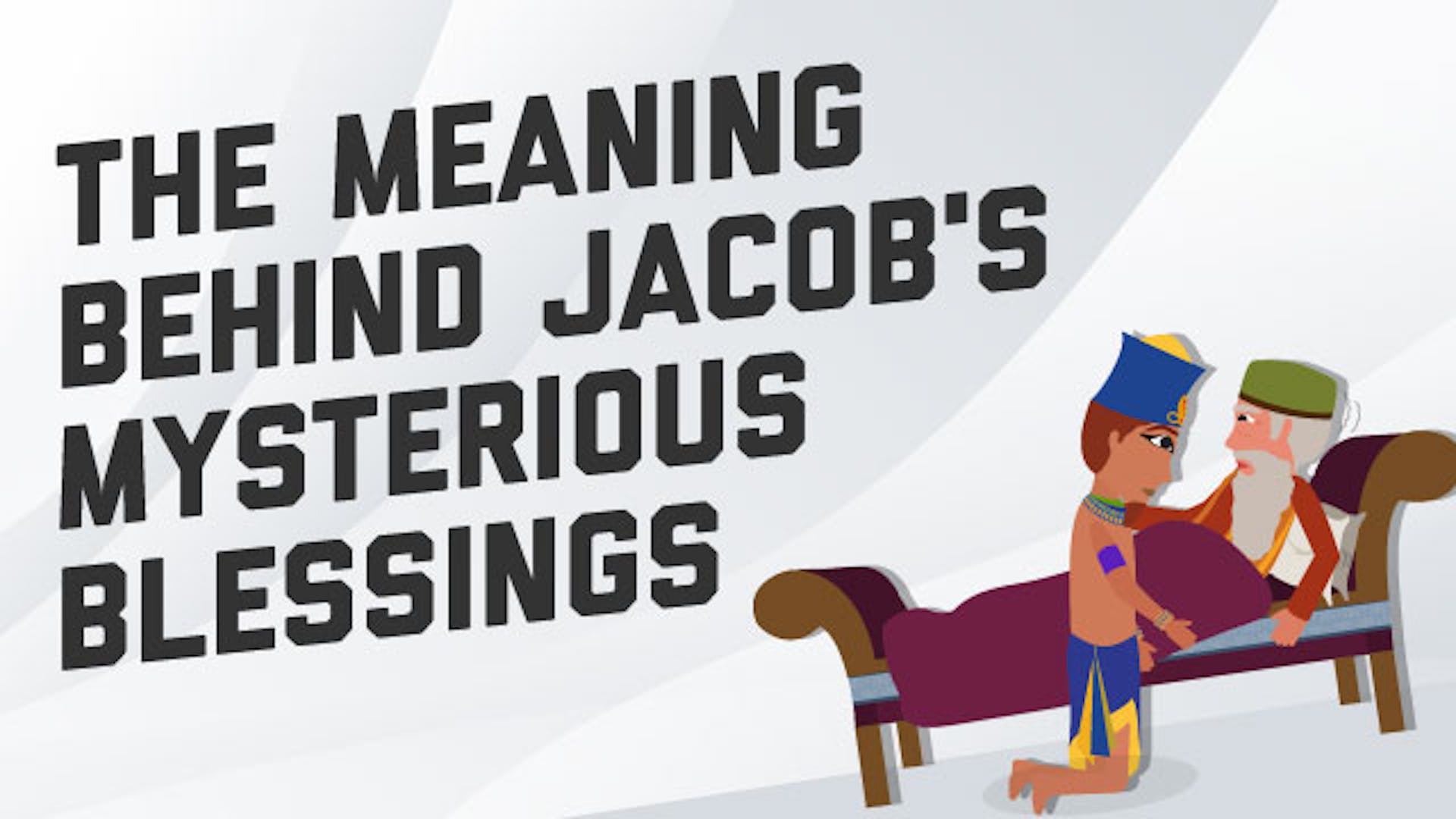 What Was Jacob's Final Blessing To Joseph Really About?

Bereishit ends with Jacob's blessings to his sons – but the blessings are so poetic that they are difficult to understand! The Torah rarely records intimate deathbed experiences, and yet a full chapter is devoted to Jacob's blessings. What is the meaning of them? This video looks at Joseph's blessing in particular, and aims to answer another mystery: Did Jacob ever find out that his sons sold Joseph?
Watch Video

PREMIUM
Printable Guide
Vayechi: Does God Speak To Us? Part 4

Jacob perceives that his death day is approaching, and he calls his son Joseph to his bed. Jacob asks Joseph to please bury him in the land of Canaan, beside his forefathers. Jacob makes him swear to it. (Click here for a fascinating video on why Jacob makes Joseph swear – a seemingly benign request which is actually much more than it appears.)

Shortly thereafter, Joseph returns to his father’s bedside, accompanied by his sons, Ephraim and Manasseh (Menashe). Jacob gives a blessing to his son Joseph, and about Joseph’s two sons, he says: “May the angel who redeemed me from all harm bless the youths, and may they be called by my name and the name of my fathers, Abraham and Isaac, and may they multiply abundantly like fish, in the midst of the land." Jacob reminds Joseph that God will one day return the family to the land of Israel.

He calls for the rest of his sons, and doles out blessings to each of them – blessings, expressed cryptically in biblical poetry, which are extremely difficult to parse (but for a take on the meaning of Jacob’s blessing to Joseph, check out our video here):

To Reuben (Reuven): “You are my firstborn, my strength and the first of my might. [You should have been] superior in rank and superior in power. [You have] the restlessness of water; [therefore,] you shall not have superiority, for you ascended upon your father's couch; then you profaned [Him Who] ascended upon my bed.”

To Simon (Shimon) and Levi: “[They] are brothers; stolen instruments are their weapons. Let my soul not enter their counsel; my honor, you shall not join their assembly, for in their wrath they killed a man, and with their will they hamstrung a bull. Cursed be their wrath for it is mighty, and their anger because it is harsh. I will separate them throughout Jacob, and I will scatter them throughout Israel.”

To Judah (Yehuda): “Your brothers will acknowledge you. Your hand will be at the nape of your enemies, [and] your father's sons will prostrate themselves to you. A cub [and] a grown lion is Judah. From the prey, my son, you withdrew. He crouched, rested like a lion, and like a lion, who will rouse him? The scepter shall not depart from Judah, nor the student of the law from between his feet, until Shiloh comes, and to him will be a gathering of peoples. He binds his foal to a vine, and to a tendril [he binds] his young donkey. [He launders] his garment with wine, and with the blood of grapes binds his raiment. [He is] red eyed from wine and white toothed from milk.”

To Zebulun (Zevulun): “Zebulun will dwell on the coast of the seas; he [will be] at the harbor of the ships, and his boundary will be at Zidon.”

To Issachar (Yissachar): “Issachar is a bony donkey, lying between the boundaries. He saw a resting place, that it was good, and the land, that it was pleasant, and he bent his shoulder to bear [burdens], and he became an indentured laborer.”

To Dan: “Dan will avenge his people, like one, the tribes of Israel. Dan will be a serpent on the road, a viper on the path, which bites the horse's heels, so its rider falls backwards. For Your salvation, I hope, O Lord!”

To Gad: “[As for] Gad, a troop will troop forth from him, and it will troop back in its tracks.”

To Asher: “From Asher will come rich food, and he will yield regal delicacies.”

To Naphtali: “Naphtali is a swift gazelle; [he is one] who utters beautiful words.”

To Benjamin: “Benjamin is a wolf, he will prey; in the morning he will devour plunder, and in the evening he will divide the spoil."

At the conclusion of having articulated these cryptic blessings, Jacob reminds his sons of his desire to be buried in the land of Canaan: in the Cave of Machpelah alongside his forebears. And with that, Jacob passed away, in the presence of all twelve of his sons — this whole family, once long-estranged, fully reunited.

Joseph mourns for his father, of course — but so does all of Egypt, with Joseph commanding that his father be embalmed. After seventy days have passed, Joseph approaches Pharaoh to communicate to him Jacob’s dying request. Pharaoh accedes, sending all the elders of Egypt to accompany Joseph and his brothers on their burial procession for Jacob. It is a grand and highly visible ritual, and it inspires comments from the surrounding nations: “What an intense mourning for the Egyptians!”

When the proceedings are complete and Joseph’s brothers return to Egypt, they are terrified: worried that now that Jacob is dead, that Joseph will seek the revenge that he has perhaps always desired. But Joseph reassures them, reiterating what he told them when they first reunited: that yes, they tried to hurt him, but it was all a part of God’s plan, that it worked out for the best — for now that he is in charge of all of the grain of Egypt, he is able to sustain them.

In the closing verses of the Book of Genesis, we hear echoes of the end of Jacob’s life. Joseph’s death day approaches; he reminds his brothers of God’s promises and adjures them to take his bones out of Egypt.

Joseph dies, at the age of 110, and is embalmed and buried in a coffin in Egypt. One day his bones will be brought out of Egypt. But it will not be in his brothers’ lifetime, and it is not the story of the Book of Genesis.

Interested in learning more about the upcoming parshiot? Check out Aleph Beta’s parsha pages on Shmot, Vaera and Bo!