God unleashes the last three plagues: locusts, darkness, and the death of the firstborns. Only after the last plague does Pharoah relent and tell Moses to leave Egypt. 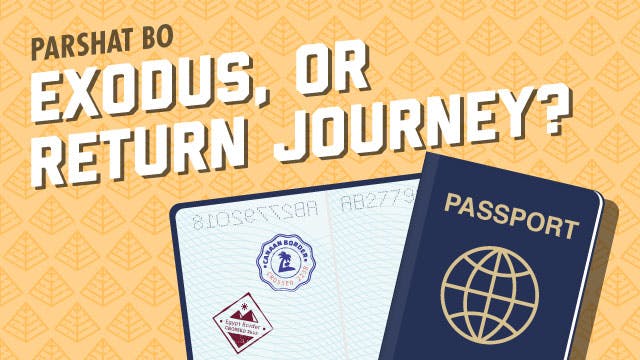 Why The Israelites Couldn't Eat Their Bread

We all know the famous story of the unleavened bread- the Israelites had no time to let their dough rise as they ran out of Egypt, so they took their dough and let it bake on their backs as they fled. But why do we need to hear about this minute detail? As a matter of fact, there are a number of seemingly odd phrases in the verses describing Israel's exodus, and they all seem to lead us to one particular place in the Torah: Judah's plea to Jacob to let Benjamin go down to Egypt so that they could get grain. Join Rabbi Fohrman as he helps uncover the mystery between two seemingly separate stories, and see how we got there, and back again.
Watch Video

Parshat Bo continues the story of the 10 Plagues. Remember, we read about the first seven in the prior parsha, Parshat Va'era. Here's a quick recap:

But before we proceed with the story of the remaining three plagues, we want to invite you to step back and ask a bigger question: Why did God need 10 plagues in the first place? If God is all-powerful, couldn't He have freed the slaves with a single plague? How about flying them out of Egypt on magic carpets? Done!

Why plagues, why these particular plagues, and why 10? These are the most pressing questions at the core of the plagues narrative, and arguably one can't understand the story here without reckoning with them.

Rabbi Fohrman poses these questions and offers his own theories: if you've got the time, we highly recommend that you check out the long version of his answers in our Passover course, "What Does It Mean To Be God's Chosen People?" But we also have a shorter, if somewhat less comprehensive, introduction to the meaning of the 10 Plagues – watch part I and part II, spread over Parshat Va'era and Bo – which focuses in particular on the question: What does it mean that God hardened Pharaoh's heart?

Now, back to the action. Pharaoh has withstood each plague until now, following a fairly predictable pattern: at times seeming to weaken in his resolve, to desperately call for Moses and Aaron and plead with them to put an end to the plague... only to go back to his old ways and refuse to free the slaves.

But now, by Parshat Bo, we start to see evidence in the text that Pharaoh's servants are seeing things differently. After Moses and Aaron threaten the coming of Plague #8 (locusts, arbeh), Pharaoh's servants say to him (to paraphrase): "How much longer are you going to let this go on? We're dying here!! This battle is lost. Just give the people what they want. Cut your losses; we beg of you."

At times in this parsha, you can start to see Pharaoh's resolve crumble, like that of his servants – but always it is followed by a hardening of heart, a reaffirmation of his initial refusal. So it goes with Plague #9 (darkness, choshech) and with Moses and Aaron's threat of Plague #10 (the death of the firstborn, macat bechorot).

Even as Pharaoh ostensibly prepares to bemoan his own firstborn, the text tells us, shockingly: "but the Lord hardened Pharaoh's heart, and he did not let the children of Israel out of his land." (If you're wondering right now about why in the world God keeps hardening Pharaoh's heart, the aforementioned videos address it.)

Midway through the parsha, before the 10th plague has been doled out, the spotlight moves away from the drama with Pharaoh and focuses on a series of laws that Moses is instructed to convey to the people.

After that follows a litany of laws that will become a template of sorts for the holiday of Passover: the sacrificing of a pascal lamb and the eating of matzot (unleavened cakes) and maror (bitter herbs).

Of course, there will be more laws involved in the observance of Passover for future generations, like abstaining from eating any leavened bread. And vice versa: some of the laws that God tells to Moses here are specific to that generation: they will not be replicated by future generations who celebrate Passover – like painting blood on your doorposts in order to immunize your home against the frightful plague of the firstborn. Moses conveys these laws to the people and they discharge them dutifully.

And in the wake of the plague of the firstborn, with Egypt consumed by mourning, Pharaoh's resolve finally breaks. (For a frightening take on the 10th Plague, see our video here.) He calls Moses and Aaron before him and urges the people to leave – and fast. And the people do: with unleavened dough in their hands (that will later be baked into matzah) and with their arms grasping the bounty of Egypt, jewelry, and garments that were willingly, it seems, lent to them by their Egyptian neighbors.

Rabbi Fohrman notices this, the way in which the Hebrew slaves depart Egypt, and builds upon it a fascinating theory about the laws of releasing a slave from service. See here for that video. And with this, the era of 400 years of Israelite enslavement in Egypt comes to a close.