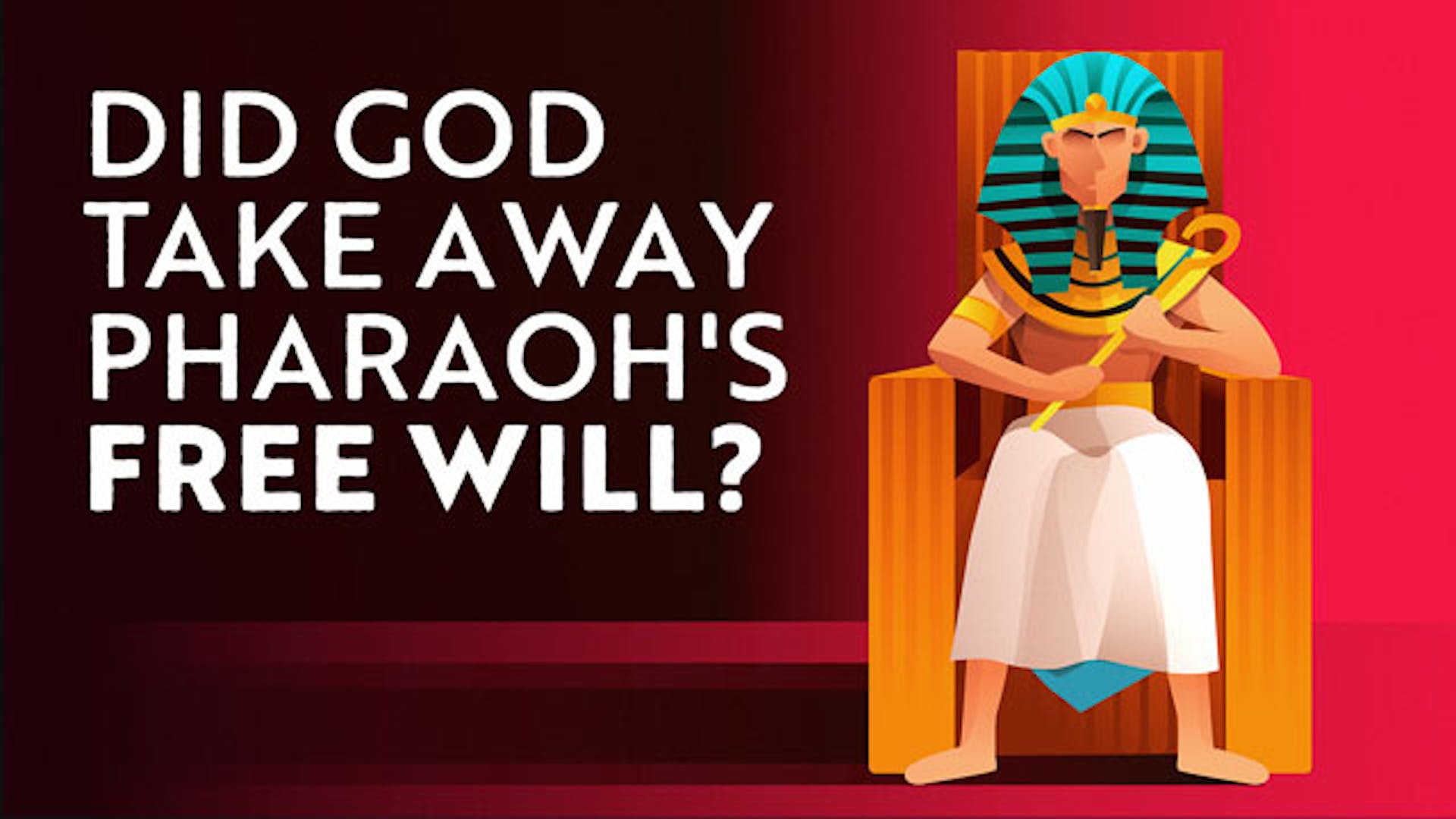 Why Did God Harden Pharaoh's Heart?

At first glance, it seems like God took away Pharaoh's free will when he hardened his heart – how could He do such a thing? In this video, we explore the different words used by the Torah – kaved and chazek. Rabbi Fohrman argues that this language shows that God did allow Pharaoh to pursue his free will, even if the vision was in defiance of God.
Watch Video

Printable Guide
Va'era: Did God Take Away Pharaoh's Free Will?

When we left off at the end of Parshat Shmot, Moses and Aaron had approached Pharaoh, introduced themselves as messengers of God, and asked him to free the Israelites. Not only did Pharaoh refuse, but he responded by increasing the slaves' burden.

Seeing all of this, Moses had turned back to God in frustration (to paraphrase): "I did what you said, but I only ended up making things worse!" And so, at the start of this week's parsha, Parshat Vaera, God reassures Moses, re-articulating His intention to free the people. No, it won't happen all at once, and no, it won't be without obstacles, but liberation will come.

God wants Moses not only to internalize this message himself – Moses is, after all, God's newly appointed messenger and leader of the people, so it's important that he has faith in the plan – but to convey it to the children of Israel. God wants them to know that He has heard their suffering, that He has been watching them, that their pain matters to Him, and that now, He intends to intervene in world affairs to do something about it.

In a word: God expresses His empathy to the people. (See here for a Passover video that relates powerfully to this notion of God's empathy for the people.) In the course of this conversation, God also says something very mysterious to Moses about the nature of His divine name. For more on that, see our video here.

After a brief break, the text clarifies the genealogy of Moses and Aaron: naming their parents, Amram and Yocheved, and letting us know the names of their offspring and relatives, many of whom will feature in the later stories of the Bible – Korach, Nadav, Avihu, Nachson, Uzziel, and others. Then, we return to the action: the second approach of Moses and Aaron to Pharaoh.

There, Moses and Aaron display before Pharaoh the first of the special "signs" that God taught them, that were meant to prove that God really was on their side: Aaron casts down his staff and it magically transforms into a snake. But when Pharaoh's sorcerers are able to replicate the trick, Pharaoh rationalizes that Moses and Aaron aren't as powerful as they claim. (Aaron's serpent swallows the sorcerers' serpents, but Pharaoh seems to conveniently overlook that.)

So Moses and Aaron announce the coming of the first plague: that God will turn the Nile waters to blood. Aaron stretches his staff out over the Nile and, sure enough, the waters are transformed. But as Pharaoh's sorcerers were able to replicate this trick too, at least in part, Pharaoh remained unmoved.

Next comes the second plague (to paraphrase): "If you still won't listen, God will bring frogs upon Egypt!" Pharaoh doesn't listen, the frogs come, and the sorcerers imitate. This time, Pharaoh calls for Moses and Aaron and asks them to stop the plague. When he does, a truly perplexing conversation ensues, whereby Pharaoh says: "Please tell your god to call off the frogs!" and Moses says: "No problem, when would be a good time?" and Pharaoh says, "Tomorrow," and Moses says, "Your wish is my command." Why tomorrow, you might well ask? Why didn't Pharaoh want the frogs gone right then and there?

It's an excellent question and it turns out to be one of the primary pieces of evidence in Rabbi Fohrman's understanding of what the 10 Plagues were all about. For the wide-scope story, we highly recommend the Passover course, What Does It Mean To Be God's Chosen People? For a shorter introduction to the meaning of the 10 Plagues, you can start with our shorter two-part video series, which focuses in particular on the question: What does it mean that God hardened Pharaoh's heart?

No sooner are the frogs gone than Pharaoh's heart is hardened. So Moses and Aaron threaten Plague #3: the plague of lice. This time, curiously, Pharaoh's sorcerers are unable to replicate the plague, which may begin to undo Pharaoh's resolve. But if it does, he doesn't let it show, because the text tells us that still he refuses to listen to Moses and Aaron.

So the lice afflict all of Egypt, with one exception: as Moses and Aaron had explained to Pharaoh, a great precision will be evinced in this plague, and the land of Goshen (where the Israelites dwell) will be perfectly immune.

Next comes Plague #4, frequently translated as "wild beasts" (or perhaps more precisely, a mixture of wild beasts – in Hebrew, arov). In the wake of that affliction, Pharaoh's resolve seems to be wavering, because he calls Moses and Aaron back and seems willing to accede to one of their earliest requests: to take a three-day trip into the desert to worship their God.

But even that doesn't lead to a large-scale change, because before long, Pharaoh is at it again with his hardening of heart, and Moses and Aaron are threatening Plague #5: pestilence. And once again, the theme of precision is highlighted: that the plague is going to affect only the Egyptian-owned cattle, but not one of the Hebrew-owned cattle.

The narrative continues apace, with the coming of Plague #6 (boils) and Plague #7 (hail). And as Rabbi Fohrman points out in his video linked above – about the 10 Plagues and the hardening of Pharaoh's heart – there seems to be something markedly different about this plague of hail.

You can see it by Pharaoh's reaction: "I have sinned this time," he tells Moses and Aaron. "The Lord is the righteous One, and I and my people are the guilty ones." To hear this kind of language coming from Pharaoh is shocking. Never before have we, the reader, known him to speak in such explicitly moral terms. "I have sinned"?? He sounds so repentant.

Yet by the end of the parsha, he has changed his tune entirely, repeating his now-familiar refrain, refusing to let the people go. What happened? What made Pharaoh see the error of his ways, only to do a 180 in the very next motion? These are the questions that Rabbi Fohrman aims to relate to in the 10 Plagues video series. With that, Parshat Vaera draws to a close, with the drama of the final three plagues to be told in Parshat Bo.

Interested in learning more about the upcoming parshiot? Check out Aleph Beta’s parsha pages on Parshat Bo, Beshalach, and Yitro!