Moses reads out some of God's many laws. Some of these laws include ethics, idol worship, animal treatment, kashrut (kosher food). God also outlines some laws relating to the major Jewish holidays: Passover, Shavuot and Sukkot. 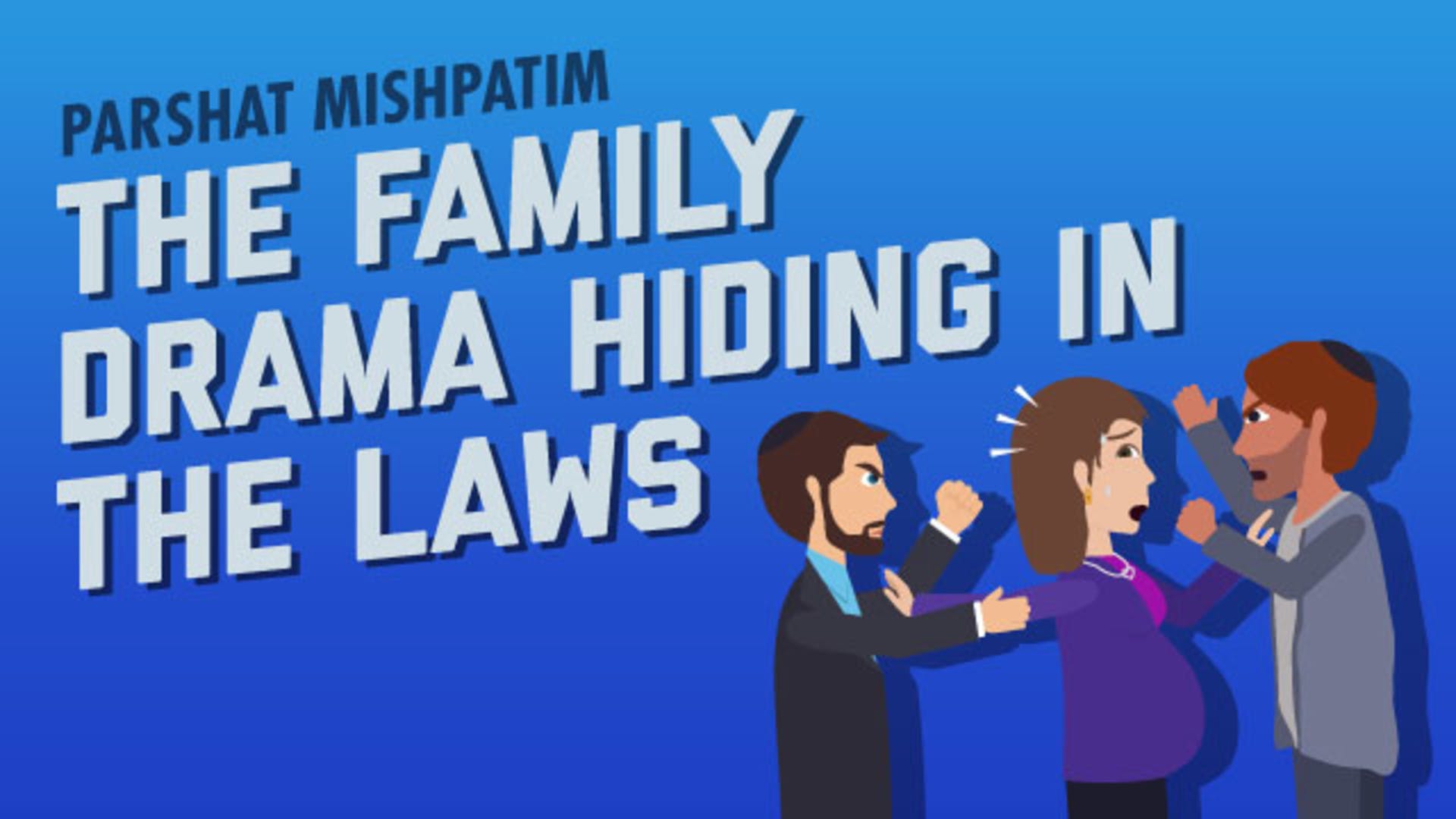 How Can The Laws Of Mishpatim Help Correct Past Mistakes?

At first glance, Mishpatim reads like a dry list of laws about cows, and donkeys, property damages and personal injuries. But what if there's more to these laws lurking beneath the surface? What if the laws themselves hold a key to understanding some of the most important stories in the Torah? Join Ami as he uncovers the hidden story within these laws.
Watch Video

PREMIUM
Printable Guide
Mishpatim: Does Our History Become Our Laws?

The children of Israel are standing at the base of Mount Sinai, and God has just spoken to them, revealing the Ten Commandments for all to hear. What comes next? Parshat Mishpatim – and, as the name implies (“Mishpatim” means “laws” or “judgements”), it’s a whole lot of laws.

In fact, until the final chapter of the parsha (and with the possible tiny exception of Ex. 23:20–23), there is no narrative whatsoever: it is one long list of laws. Do do this, don’t do that, and if you disobey, thus will be your punishment.

The laws cover a range of topics: slaves, loans, charging interest, personal injury, property damage, and more. But they are far from comprehensive. It is not as if this is a complete list of the 613 mitzvot, of everything that God asks of the children of Israel over the course of the remaining five books of the Torah.

That has prompted many commentators to ask the question: why are these laws singled out in Parshat Mishpatim? And when you ask that question, you can’t help but notice that there was another set of laws that were singled out only a chapter ago, indeed a shorter list than the one which is found here, a list of ten laws: the Ten Commandments.

How do the Ten Commandments relate to the laws of Parshat Mishpatim? Or rather, do they? Imu Shalev thinks that they do. To hear more about that, see Imu’s video here — and once you’ve watched that, we recommend that you check out our podcast on Parshat Mishpatim which is something of a sequel to Imu’s video.

Now, what are some of these laws?

Well, the list starts with a discussion of how to treat avadim, which is generally translated as “slaves” (although “servant” or “worker” may be more appropriate in this context) – and that probably raises a red flag for you right away. Slavery? Isn’t this barbaric, oppressive? Aren’t we, in the enlightened 21st century, way past this kind of backward thinking?

Those are great questions. Really, they are – and it’s the kind of thing that we, at Aleph Beta, don’t want to shy away from. We want to lean into it. So… what does that look like?

For starters, Rabbi Fohrman has a video where he tackles the case of the female slave, head-on – and it leads him to some really interesting and deeply relevant conclusions. Click here to see it.

Beyond slavery, here’s a sampling of some of the more interesting laws that come up in Parshat Mishpatim:

Look for a moment at the law of the man who kills another without malice or forethought. Rabbi Fohrman notices something fascinating about this law: that it seems to be based on an actual story, earlier in the Torah, of a person who harms another person – without malice, without forethought.

Not only are the two – the law and the story – conceptually similar, but upon further inspection, it turns out that they employ very similar words and phrases. It’s wild but it actually seems that this law was somehow born out of that earlier story – that our history as a people becomes our laws.

It’s a revolutionary idea, one which gives you a new lens through which to see all of our laws – and perhaps all of our stories, too. We highly recommend that you get started with Rabbi Fohrman’s video on this: “Does Our History Become Torah Law?”

And then, at the end of the parsha, are a few verses that detail Moses' ascent partway up Mount Sinai with Aaron, Nadav, Avihu, and 70 elders, a curious description of their ability to glimpse something of God (a verse which demands interpretation, since of course God has no physical form!), and what is perhaps the first communal sacrifice to God.

Now, having described all of that: we think that there’s an elephant-in-the-room question which you’ve got to ask about this parsha. What is so spiritual about laws?

If you’re very familiar with Judaism, then this may seem like an odd question to ask. Of course Judaism is all about laws. That’s how the religion works.

But we want to invite you to take a step back and probe that for a second. We’re supposed to take a lamb that is nine-days-old and bring it as a sacrifice to God, but God forbid (so to speak) we bring a lamb that is seven days old as a sacrifice – woe to us!! That’s against the law! Why?? What kind of a religion is this? What is so spiritual about that?

That’s exactly the kind of question that we like to ask at Aleph Beta – and we’ve got something for you: Imu Shalev gets into it in his aforementioned video, click here to see it.