The Chayei Sarah Torah portion is read on November 11, 2023

Sarah dies, Abraham mourns and buries her, and then sends his servant to find a wife for Isaac. 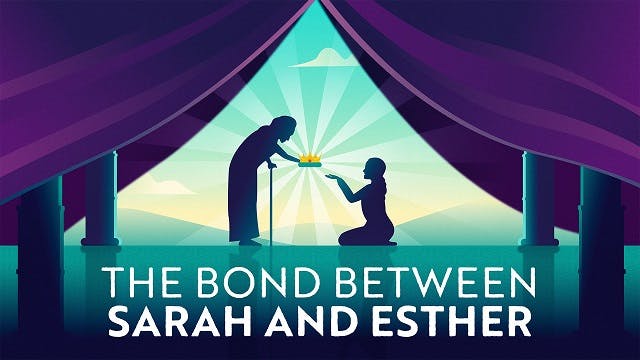 What Connects Sarah And Esther In The Bible?

The Torah tells us that Sarah died when she was 127. The Torah also tells us that there were 127 provinces in the Persian empire in the days of Achashverosh and Queen Esther. Coincidence? Rabbi Akiva doesn’t think so, and neither does Rabbi Fohrman. Watch this video to find out why.
Watch Video

Printable Guide
Chayei Sarah: What Makes For An Extraordinary Life?

Parshat Chayei Sarah begins with the death of our matriarch, Sarah, in the city of Hebron. Abraham travels to Hebron to mourn her death, and then negotiates with the local Canaanites to buy a burial plot for her. He buys Ma’arat Hamachpela – which would later be known as the Cave of the Patriarchs – from a man named Efron.

Abraham then sends his servant to find a wife for his son Isaac, on one condition: she must come from Abraham’s birthplace. [Interesting side note: the servant remains nameless in the Biblical text, but the Rabbis identify him as Eliezer.] The servant takes an oath to follow Abraham’s command and sets off on his journey with a caravan of ten camels and all sorts of goodies from the house of Abraham. The servant reaches a well and asks God to show him a sign: if a woman draws water from the well and offers a drink to him and to his camels, then he’ll know that she’s fit to marry Isaac.

In the very next breath, Rebecca appears and does exactly as the servant had asked God! He then asks where she’s from and discovers that she’s from Abraham’s own family. Doesn’t it really feel like a match made in Heaven??

The servant heads home with Rebecca, meets with her family, and recounts the miraculous story of his prayer and the sign from God. He also gives Rebecca jewels and gifts and then takes her back to meet Isaac. The two are married, and the text tells us that Isaac loves Rebecca and finds comfort after the loss of his mother.

At the end of the parsha, Abraham gets married to a woman named Keturah (whom the Rabbis identify as Hagar) and we hear a genealogy of the children he has with her. Abraham dies and is buried by his two sons, Isaac and Ishmael, next to Sarah in Ma’arat Hamachpela.

Interested in learning more about the upcoming Parshiyot? Check out Aleph Beta’s Parsha pages on Parshat Toldot, Vayetze and Vayishlach.