Miriam and Aaron die. The Jews complain that they are thirsty. Moses, instead of speaking to the rock, hits it and angers God. Balak pays Balaam to curse the Jewish people. Balaam hits his donkey when the donkey stops moving forward. The donkey tells Balaam not to curse the Jews, so Balaam blesses them instead. 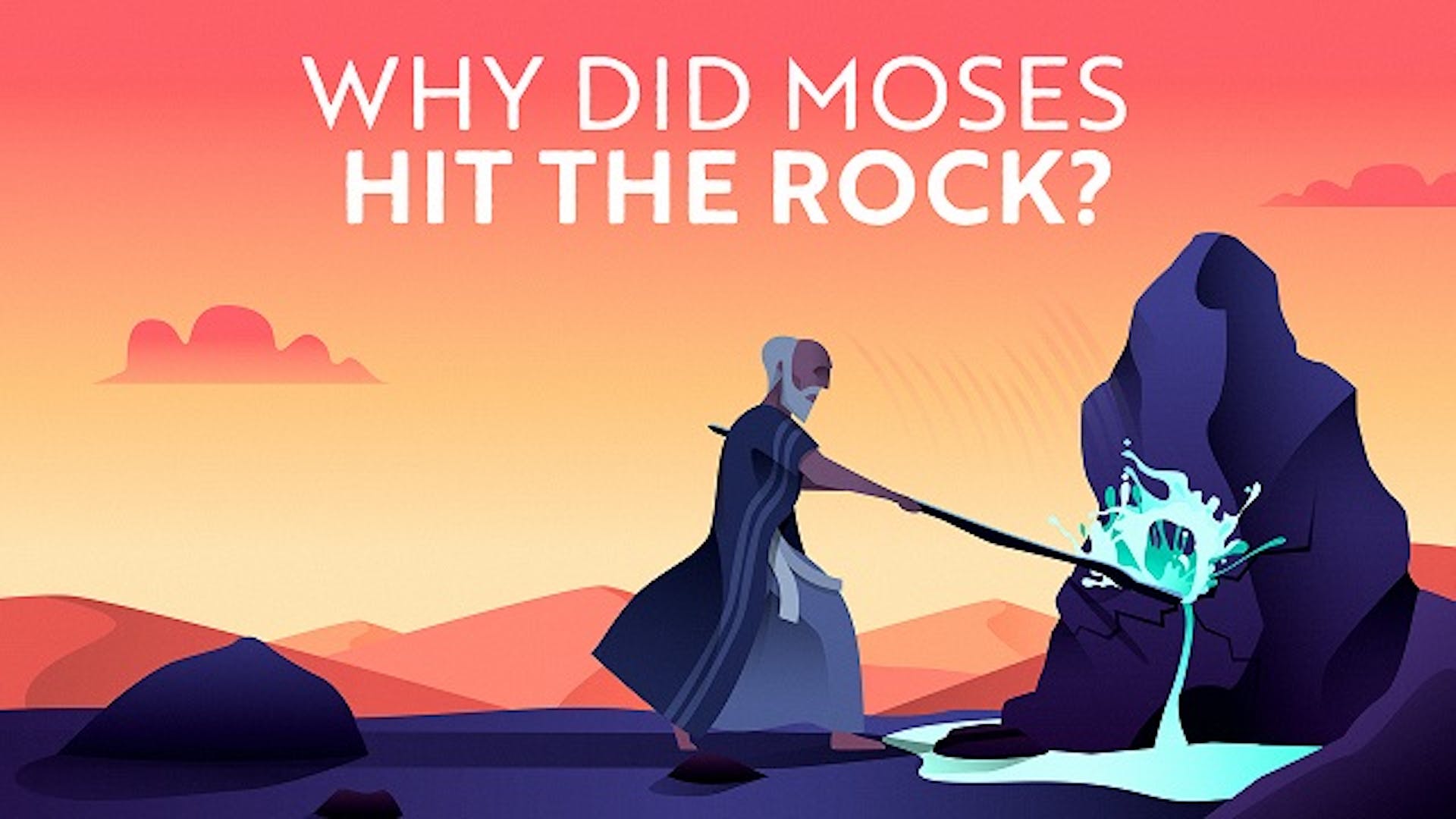 The Deeper Story Behind Moses Striking The Rock

In this week’s Torah portion is the famous story of Moses hitting the rock to get water and God subsequently barring him from leading the nation to the land of Israel. Why would Moses do that? What was his thinking? This week, we will explore this question in the context of water, Miriam, and the question of what it means to have faith.
Watch Video

Parshat Chukat continues to tell the tale of the Israelites journeying through the desert to the Promised Land, and while the parsha is chock-full of stories, it opens not with a story but with a law: the law of the parah adumah, the "red heifer." What is the law of the red heifer (female cow) and why is it important? As the Torah explains, the red heifer is used to "purify" someone who has become "impure." A person can become impure through a range of possible behaviors (e.g. giving birth, having a period, touching the carcass of a non-kosher animal, coming into contact with a human corpse, etc.) and once a person is impure, he/she can't participate in certain spiritual and communal activities, like entering the grounds of the Temple, offering or eating a sacrifice, or in some cases, even dwelling in the camp with the rest of the nation.

Earlier sections of the Torah (notably Parshat Metzora in the Book of Leviticus) laid out a procedure for how impure people could change their status, but here, in Parshat Chukat in the Book of Numbers, we learn about a very specific case: about the person who became impure because he/she came into contact with a human corpse. That person's only means of becoming pure is to follow the procedure of the red heifer: to identify a perfectly unblemished and wholly red female cow, who never wore a yoke around her neck, and to slaughter and burn it (along with some odd ingredients: cedar wood, hyssop, crimson wool), then drip water onto its ashes and sprinkle that mixture onto the affected individual. (Now that you've heard the law, are you curious to understand the symbolism behind this strange ritual? The Parsha Lab podcast, "Why Do We Need A Red Heifer?," addresses that question in an unexpected way.)

After the law of the red heifer comes perhaps one of the most important stories in all of the Israelites' travels, a sure turning point in the Book of Numbers. Miriam, the sister of Moses, dies, and immediately afterwards, the people complain that they are thirsty. God instructs Moses to provide water for the people by speaking to a rock... and Moses follows God's instruction with one small change: instead of Moses speaking to the rock, he strikes it with his staff. He's successful in drawing water from the rock, miraculously – but God expresses His severe displeasure with Moses. God decrees a punishment that will haunt Moses for the rest of his life: that he will not be the one to lead the people into the Promised Land, the land of Israel.

There are so many questions to be asked about this story; it's hard to know where to begin. Why didn't Moses just listen to God? Why did God respond with such a harsh punishment? And does Miriam's death, at the very start of the story, have anything to do with this?

In two videos on Parshat Chukat, Rabbi Fohrman asks and answers these questions in surprising ways. In "Was Hitting the Rock So Horrible?" he tackles the question of what was so bad about hitting the rock instead of speaking to it, attempting to put forth a satisfying question to this upsetting question. And in "Why Did Moses Hit The Rock?", he invites us into Moses' thought-process, putting forth a theory as to what possessed Moses to hit the rock instead of speaking to it... and what that might possibly have to do with the death of his sister Miriam immediately prior.

But there's one more question about this story that demands to be asked — not about Moses' response to the water crisis, not about his fate, but about the complaints of the people that precipitated it all. The Torah tells us that: "The congregation had no water; so they assembled against Moses and Aaron; the people quarreled with Moses." That sounds pretty harsh. Moses has ably and faithfully taken care of them for the past 39 years in the desert, their every need has been met — water, manna, military protection — and now, they find themselves without water... and how do they react?

It would be one thing if they said, "Excuse me, Moses, we just noticed that there's no water and we're getting worried." But to assemble against Moses and Aaron, to quarrel with them? And that's not the worst of it. Look at what they say: "Why have you taken us out of Egypt to bring us to this evil place?" It's nuts! They were miraculously redeemed from bondage, and now they have the ingratitude to say such a thing? How can they continue to complain after everything that Moses — and God, for that matter — has done for them? Imu Shalev and David Block tackle that baffling question in their video, "A Turning Point In Israel's Relationship With God."

And Parshat Chukat is far from over. In the verses that follow, we read about the death of Aaron, Moses' other sibling, atop Mount Hor, about morecomplaining from the people (this time, God responds by sending poisonous snakes their way — to understand that story, check out Daniel Loewenstein's video: Punished... By Snakes?), and about their negotiations — diplomatic and military — with the nearby nations as they attempt to make their way to Israel. The Amalekites (disguised as Canaanites) launch an unsuccessful attack, the king of Edom refuses their peaceful request to travel through his lands, the kings Sichon and Og instigate an violent attack and are routed, their lands conquered, and the Israelites proceed to the eastern bank of the Jordan River, poised to soon cross over and finally enter Israel.

The bulk of Parshat Balak deals with a single story: the drama of Balak as he hires Bilaam (conventionally written in English as "Balaam") to try to curse the Israelites. Here's how the plot goes down.

Balak, the king of Moab, takes notice of the Israelites as they wander in the desert close to his people's territory. You see, the Israelites recently enjoyed a stunning victory against two neighboring kingdoms of Sichon and Og (those are the names of the kings, respectively) — and Balak is intimidated. He doesn't want what happened to those other kingdoms to happen to Moab, his people.

So he makes a plan. He seems to know that taking on the Israelites in military battle is a bad idea, so he resorts to another tactic: spiritual warfare. And by spiritual warfare, we mean that Balak seeks out a local prophet named Bilaam and tries to hire him as a mercenary of sorts to curse the Israelites. Apparently, Bilaam has a special knack for cursing people. (You didn't know that there was such a thing as a non-Israelite prophet? Well, now you know. And as the story proceeds, you'll see that Bilaam really does seem to be a prophet — the Almighty God really does talk to him — although his righteousness is up for debate.)

At first, Bilaam expresses reluctance to work for Balak. Before saying yes, he wants to know if God approves of the mission. God indeed comes to him that night and makes clear His Divine disapproval: "You shall not go with them! You shall not curse the people because they are blessed." Bilaam conveys his regrets to Balak's messengers, but Balak doesn't want to take no for an answer. He is persistent, and after some back and forth, Bilaam ultimately concedes — and God seems to give a perfunctory sort of approval: that Bilaam can go but should speak only the words that God puts in his mouth.

You have to ask: Did God really want Bilaam to go on this mission? And did Bilaam truly care what God thought, or was he just going to do his own thing anyway, just going through the pious motions? Rabbi Fohrman explores this question and paints a rich and textured portrait of Bilaam in his video.

The question about whether God really wanted Bilaam to go on this mission or not seems to get answered pretty soon, for we read that when Bilaam set out on his journey, God placed in his way an angel bearing a sword. Bilaam nearly misses the message entirely, and arrives at his destination having been reminded, again, only to speak the words that God puts in his mouth.

When it comes time for Bilaam to actually open up his mouth and curse the Israelites, as he was commanded by Balak to do, a curious thing happens: instead of saying a curse, he says a blessing instead. It seems that God "put" these words in Bilaam's mouth. Balak is enraged, but a second and third attempt yield the same result. (By the way, this is where the "Ma tovu" prayer comes from — "How beautiful are your tents, o Jacob, your dwelling places, O Israel." It's a prayer that may be familiar to some from the synagogue service. It is just one of the many wonderful things that Bilaam says about the people.) It seems that what God said the very first time is true: "You can't curse the people because they are blessed."

One of the most curious things about the whole Bilaam story is that our Sages, the Rabbis of the Talmud, compare Bilaam to Abraham. You might be thinking, why would you ever think to compare these two characters? Rabbi Fohrman asks and answers this question, showing that there's much more to this parallel than meets the eye — and that it has much to teach us about the nature of Abraham's mission in this world. See his videos, "Balaam, Prophet For Hire?" and "What Is Israel's Purpose In The World?" for more on that idea.

With that ends the saga of Balak and Bilaam, but the parsha isn't over yet. There's one more story, or at least a half story: the story of the Moabite and Midianite women who attempt to seduce the Israelites. They tempted the Israelites to engage in avodah zarah, idol worship, unsurprisingly invoking an angry plague from God.

In the midst of this plague, one particular Israelite, who goes unnamed by the Torah, is described as doing something shockingly provocative: he "brought the Midianite woman to his brothers, before the eyes of Moses and before the eyes of the entire congregation of the children of Israel." One member of the congregation who sees this stands up and takes immediate (and violent) action: he kills both the man and the Midianite woman, driving a spear through their bodies. That man is none other than Pinchas, a grandson of Aaron (the High Priest) — whose namesake parsha comes right after Parshat Balak. In the videos on Parshat Pinchas, we grapple with the questions that are raised by this account: Did Pinchas do the right thing? When is it good to act with zeal on behalf on God, and when it is horribly misinformed? See Rabbi Fohrman's video, "What Does It Mean To Be Zealous For God?," for a discussion of that very question.