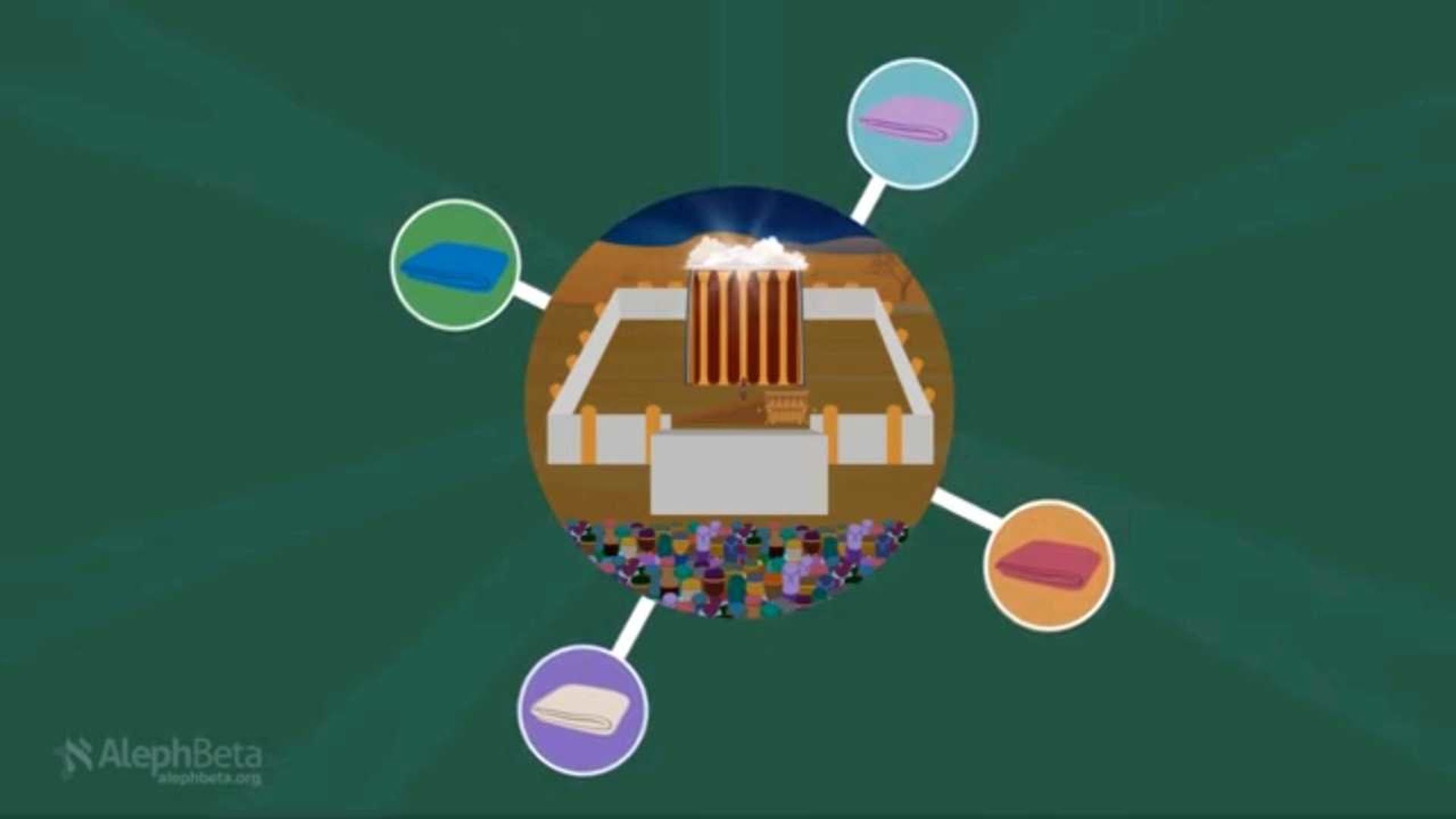 A Deeper Dive Into The Symbolism Of The Tabernacle’s Colors 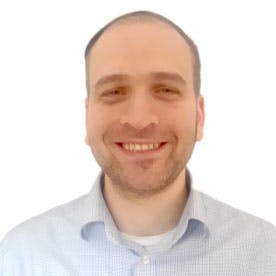 Hi all! In this year’s Pekudei video, we started digging into the deeper meaning of the colored fabrics used in the Mishkan. I wanted to take that material a step further here, and dig a little deeper.

The basic thesis of the video was that the interweaving of the four colored fabrics was meant to evoke the rainbow, which itself symbolically represents man’s dominion over Earth. Thus, the interwoven fabrics act like a border, reminding anyone entering the holy inner chambers of the Mishkan that they are no longer in man’s world – the interior of the Mishkan is God’s domain.

Yet this theory, which explains what the fabrics mean as a whole, doesn’t completely solve the mystery of the colors. Because there are, in fact, several instances in which one or more of these colors is used on its own, and not as a unit.

One of the most mysterious and obscure places in which this occurs is in Numbers 4:5–13, the section of the Torah dealing with the way the Mishkan was disassembled and prepared for transport in the wilderness (if you were only vaguely aware this section even existed, I’m right there with you).

You can see the full text at the bottom of the post, but here’s the gist:

It’s a lot of detail, but what’s fascinating is that this seems to be a clear indication that the colors have their own unique meanings. If blue is the “right” color for covering nearly everything, yet the vessels of the Table need to be covered in red, and the Outer Altar in purple, then each of those colors has to signify something, something that makes it fitting to be paired with certain vessels but not others. And the theory presented in the video can’t help us make sense of this – it only suggests what the colors might mean in unison.

One of the great Jewish scholars of the 19th century, R’ Hirsch’s commentary on the Torah frequently offers profound explanations of seemingly trivial or inscrutable topics, and the colors of the fabrics are no exception. R’ Hirsch sees in the fabrics symbolic representations of four levels of life, all of which, he argues, are present in man.

Here are the basics of his suggestion:

If we understand the colors in this way, R’ Hirsch suggests, we can make sense of the cloths used to cover the vessels. Naturally, one would expect the vessels housed inside the holy chambers, used in service of the Divine, to be covered in the Divine color, Techeilet. The Showbread and the vessels involved in its production – symbols of physical sustenance, a necessity common to all animate creatures – are covered in Tola’at Shani, the fabric representing primal animal life. And the Outer Altar, the only vessel that lived outside the holy chambers, served as a vehicle for the Israelites to acknowledge their sins and atone for them, a place that embodied the effort to be better and grow closer to God. That warranted its being covered with Argaman, the fabric that represents man’s capacity for morality.

It’s a very elegant theory, and there’s a considerable amount of circumstantial evidence that supports it. The first time I encountered it, though, one thing bothered me: R’ Hirsch claims that when these fabrics are woven together, as in the case of the innermost walls of the Mishkan, they represent the incredible range of man’s existence, from its most mundane aspects to its most transcendent. Yet this begs the question: why is the range of man’s existence a concept that needed representation in the inner walls in the Mishkan? Why do symbols of man’s minimum and maximum potential belong there, specifically? And on this point, R’ Hirsch is silent; in all of his writings that I’ve encountered, this particular piece of the puzzle is not addressed.

Questions About the Meaning Of The Tabernacle's Symbolic Colors

While I can’t know how R’ Hirsch would answer this question if asked, I’d like that there might be something fruitful in combining his theory with the one advanced in this year’s Pekudei video. On the one hand, viewing the colors as a border provides an answer to the question I just posed. Whether the colors represent man because they represent the range of levels of his existence, or they represent man because man’s perspective is fragmented like a rainbow, the fact is that they represent man, thus making it possible to view the inner walls of the Mishkan as a border indicating where man’s world stops. In fact, given that the colors represent many different levels of life, one might view this border as making a bolder statement: beyond here is not simply not man’s world; it’s a world beyond all life on Earth.

And on the other hand, one of the lingering issues with the theory presented in the video is that a rainbow has many colors that are not represented in the walls, and is missing one that is (white). If we incorporate R’ Hirsch’s theory, though, then we can view the interwoven fabrics on two levels: as a whole, and as the sum of its parts. As a whole, the fabrics are a series of colors arranged side by side, which structurally parallels a rainbow. And as the sum of its parts, the fabrics are specific colors that represent the array of levels of life found in man. So the “missing” colors might be a result of the fact that walls were meant to simultaneously symbolize two concepts, one of which needed a smaller subset of fabrics.

Finally, if we accept R’ Hirsch’s hierarchy of colors, one more piece of evidence emerges that could support the theory of the rainbow presented in the video. In several of Aleph Beta’s videos, we’ve noted the striking parallel between God’s act of making a space for us in His “world,” through the creation of the universe, and our act of making a space for God in our world, through the construction of the Mishkan. If we accept that, and we accept the theory that the colored walls represent a border, the place where our world stops and God’s place begins, then we would expect to see something similar in God’s creation of the universe – some sort of symbolic border, demarcating the space where humanity’s world begins.

And I think we do see that. Because God created space for man by separating between the upper waters and lower waters, giving man land to inhabit. The sky and the sea are a kind of border, marking the space in which humanity can fully have a home. And what color are they? Techeilet – the color that represents the Divine. Just as the inner chambers of the Mishkan are lined with the colors representing man’s world, the world itself is lined with the color representing God’s world; the parallel holds.

So that’s my suggestion – I hope you found it illuminating! And even more than that, I hope you walk away with the same sense of excitement I got, staring into the great mysteries of the Torah and trying to unravel their secrets; the same sense of awe at its complexity and layers; and the same appreciation of the creativity of the great men and women who’ve tried their hand at making sense of it all before us.

Watch the video below for a deeper discussion on what the Tabernacle's colors mean.

At the breaking of camp, Aaron and his sons shall go in and take down the screening curtain and cover the Ark of the Pact with it.

They shall lay a covering of tachash skin over it and spread a cloth of pure blue on top; and they shall put its poles in place.

Over the table of display they shall spread a blue cloth; they shall place upon it the bowls, the ladles, the jars, and the libation jugs; and the regular bread shall rest upon it.

They shall spread over these a crimson cloth which they shall cover with a covering of tachash skin; and they shall put the poles in place.

Then they shall take a blue cloth and cover the lampstand for lighting, with its lamps, its tongs, and its fire pans, as well as all the oil vessels that are used in its service.

They shall put it and all its furnishings into a covering of tachash skin, which they shall then place on a carrying frame.

Next they shall spread a blue cloth over the altar of gold and cover it with a covering of tachash skin; and they shall put its poles in place.

They shall take all the service vessels with which the service in the sanctuary is performed, put them into a blue cloth and cover them with a covering of tachash skin, which they shall then place on a carrying frame.

They shall remove the ashes from the [copper] altar and spread a purple cloth over it.