In Parshat Kedoshim, we learn about laws related to kedusha, holiness, plus the prohibition against idolatry, the mitzvah of charity, the principle of equality before the law, and the sacredness of life. 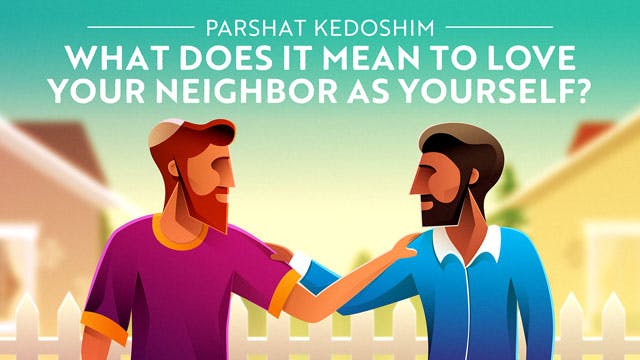 What It Means To Love Your Neighbor As Yourself

We all know the maxim, "Love your neighbor as yourself." But how do I do that? As it turns out, the Torah points a way. In this video, Rabbi Fohrman gives us the context for this directive, and helps us find the building blocks for true love.
Watch Video

Printable Guide
Kedoshim: How Can I Achieve True Love?

Parshat Kedoshim continues to explore the theme of "holiness" that we read about in the prior parsha, Acharei Mot. It opens with a bold statement from God: "You shall be holy, for I, the Lord, your God, am holy." What follows is a long-list of laws that are meant to help us to attain holiness, so that we can somehow imitate God. Below we have assembled a partial list of these laws, and we invite you to read through the list carefully and see what you notice. Does anything strike you as odd? Are there common themes between these laws?

You may have noticed that this list contains a combination of mitzvot bein adam l'Makom (laws between people and God) and mitzvot bein adam l'chaveiro (laws between people). Many of these laws are inspiring examples of what we might call "social justice" — the imperative to relate with compassion and kindness to those in need and to provide for them. But many of the laws, particularly the ones that govern man's relationship with God, seem dry and technical: like the prohibition on leaving a sacrifice over until the third day.

The text goes back and forth between these different kinds of laws with seemingly no rhyme or reason, and you may have wondered why that is so. Rabbi Fohrman raises this question in his video, "Social Justice...and Sacrifices?" Rabbi Fohrman focuses in on the progression of laws that include the improper bringing of sacrifices, of leaving parts of your harvest for the poor, and of not lying/stealing/etc. — and instead of concluding that the laws of Kedoshim are a random assortment, in no particular order, Rabbi Fohrman argues that there is a very intentional — and very powerful — logic behind their presentation.

If you're interested in further probing this list of laws, you may have noticed something else strange — that not only does this list seem to be in random order, but it's far from clear what all of these laws have to do with "holiness" in the first place! (And that is the introduction to this parsha, after all!) Serving God and helping the poor seem like very "holy" things to do... but not shaving the corners of your beard? Not eating fruit from a tree's first three years? These are just two examples from the parsha, but there are many more to be found. In their video, Imu Shalev and David Block suggest that the key to understanding Parshat Kedoshim and its array of strange laws is to understand the concept of holiness — an idea that is plagued with misconceptions. Holiness doesn't mean hanging out in the clouds with God and the angels. What is holiness and how do these laws help us to achieve it? And how does that relate to God's holiness? Watch here to find out.