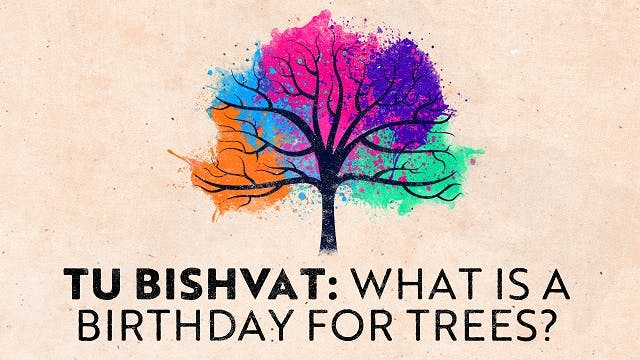 What Happens On Tu BiShvat: The Birthday Of The Trees?

Every year, we celeb

The Meaning of Tu BiShvat

Tu BiShvat is the Jewish New Year for fruit trees. It’s a day to celebrate the new fruits of the season and to remember our connection to the earth. But why do we celebrate a new year for fruits? How is Tu BiShvat still meaningful today?

The Jewish New Year for Trees

In modern times, Tu BiShvat has become a somewhat environmental holiday, incorporating planting trees and respecting nature. Interestingly, the calendar year is not simply a function of Rosh Hashanah, the most famous Jewish New Year. The Mishnah states that there are actually four different New Years, each used for a different area of law.

The New Year for trees, according to the dominant opinion, is the 15th day of the Jewish month of Shvat. In gematria – a Hebrew system that gives numerical values to letters – Tu (or ט״ו in Hebrew) is the equivalent of 15, hence the name "Tu BiShvat."

In Hebrew, Tu BiShvat is also referred to as "Rosh HaShanah La'Ilanot," which translates to "New Year of the Trees" in English. Tu BiShvat in 2021 falls on January 16th at nightfall and continues until sunset on January 17th.

This specific date was chosen because it’s the time of year when most of the year’s rain has already fallen (Talmud, Rosh Hashanah 14a). According to the Talmud, the rainy season in Israel starts a few weeks before Tu BiShvat. When Tu BiShvat arrives, enough rain has fallen to make the soil fertile and the trees able to bear fruit.

In Jewish law, the calendar has implications in a number of legal domains. The validity of a contract depends on an accurate date; animals’ ages affect their eligibility for sacrifice, and tithes can’t be taken from batches of produce grown in different years. Tu BiShvat affects a number of laws related to produce, such as Ma’aser, Revai, and parts of the Shemittah cycle.

The Biblical History Behind Tu BiShvat

The significance of this day is related to the Bible’s agricultural commandments (although Tu BiShvat holiday is not specifically mentioned in the Bible). According to the Bible, you can’t just plant trees and eat their fruits.

There are many laws that dictate how farming and harvesting produce need to be carried out. For example, there’s a mitzvah called “orlah,” which states that fruit may not be eaten from a tree during the first three years of the tree's life.

Tu BiShvat also played an important role with regard to “ma’asrot,” taxes and tithes that were taken from fruits and vegetables. The specific types of taxes for a given year would change based on an alternating yearly cycle. The various taxes included:

All of these contributions had to be brought from produce of the current year, and Tu BiShvat marked the beginning of each new year for trees and their fruits. Tu BiShvat was instituted as a cut-off date, a universal “birthday” or new year for the trees, in order to determine the age of all fruits. So whether it's an apricot, a pomegranate, or a clementine tree, their ages are all calculated starting from the same date.

The Origin of Tu BiShvat

Tu BiShvat is not mentioned in the Bible. It appears for the first time in the Mishnah (Rosh Hashanah, 1:1) where there’s a dispute between the schools of the great Sages Hillel and Shammai over the exact date of the “New Year for the Trees.”

Because the Mishnah calls Tu BiShvat a New Year, or "Rosh HaShanah," it receives a semi-special status as a holiday. As on all other festive days, the penitential prayer Tachanun is omitted in the daily services.

However, there is no other religious requirement on this day. As such, some may find it hard to relate to a “New Year” for trees, especially when the rhythm of farm life is so far removed from our modern lives.

But Tu BiShvat has not lost its importance: it is a day to remember the role of the Creator in all aspects of our lives, which we explain in our video above, even if we’re not growing oranges in the backyard or bringing fruit offerings to the Beit Hamikdash.

When you hear the words “New Year for the Trees,” you might imagine trees with party hats counting down to midnight, or blowing shofars and dipping the season’s new fruits in honey. But Tu Bishvat has nothing to do with any of that.

There is a broad spectrum of customs and approaches to Tu Bishvat. Today, Tu Bishvat is commonly celebrated by eating members of the “seven species” the Torah links to the land of Israel – wheat, barley, grapes, figs, pomegranates, olives and dates – and by eating fruit in general, especially unusual fruit.

Some also celebrate with a Tu Bishvat seder, a ceremony that focuses on the symbolism of different kinds of fruits and trees. Additionally, there is a variety of Tu Bishvat customs that have developed over the generations, such as getting in touch with nature and planting trees.

The question is: How does it all tie together? There are the Biblical agriculture laws, Kabbalists tying together different parts of Creation, environmentalists working to take better care of our planet, Israelis enjoying the sights and tastes of nature; is there a way to tap into these different layers of Tu Bishvat and make it meaningful for us today?

Check out this Tu Bishvat video for a fresh perspective that touches on all of these layers of meaning.

Some people celebrate a Tu Bishvat Seder. While this custom has turned into a popular celebration, it originated as an esoteric practice of Kabbalists in Israel and Spain in the 16th and 17th centuries. They created a seder, loosely modeled on the Passover seder, that involved eating various fruits and drinking four cups of wine.

The seder follows a special order of eating and drinking that was intended to be a mystical rectification of “the Four Worlds,” a Kabbalistic depiction of the various aspects of Creation that includes both the physical and spiritual planes. Interestingly, the popular concept of “tikkun olam,” which literally means “fixing the world,” derives from Kabbalistic practices such as this one.

In the Tu Bishvat seder, the fruit’s smell and appearance – the absence or presence of a peel or seed – are all taken to symbolize different facets of reality.

We may ask to what extent is the source of life covered over by a “peel?” How much are we separated from that which gives us life? How much of life can we absorb directly, and be filled with God’s goodness?

The various colors of wine are likewise used to symbolize the interaction between God’s qualities of kindness or Chesed (white wine) and severity or Gevurah (red wine).

Another way to mark Tu Bishvat holiday is to spend time focused on the natural world. Go out hiking, work in your garden, go out for a picnic with family or friends; all of these are ways to enjoy the natural world and to increase our awareness of the God-given gift of Creation.

Tu Bishvat can also be used as a powerful time to strengthen our commitment to taking better care of our planet. The Torah says that God placed Adam in the Garden of Eden “,לְעָבְדָ֖הּ וּלְשָׁמְרָֽהּ” to “work and protect it” (Genesis 2:15). The basic job of human beings is to be stewards of the Earth. We make the most use of it, and it is our responsibility to protect it.

With the advent of the Zionist movement, Tu Bishvat took on a new dimension. It became a day associated with returning to the ancient homeland of Israel and working the land as our ancestors did.

In modern day Israel, Tu Bishvat has become a day that is focused on connecting with the land and its nature. People eat fruit, and enjoy hiking and planting trees throughout the country. This modern day practice fits well with the verse from Leviticus (19:23): “And when you come to the Land, plant all manner of fruit trees.”

“The planting of fruit trees in the Land of Israel is not just an ordinary planting. It is a way in which we cling to the mitzvot of God, for He has been involved in planting and growing things on this earth from the Beginning… Planting was the first thing that God did after He created the world. It says: ‘The Lord God planted a garden in Eden in the East’ (Genesis 2:8). So too, when you enter the Land of Israel, the first thing you should be doing is planting."