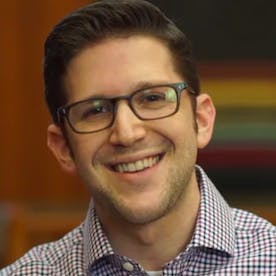 David Block:\tHey everyone, welcome to Aleph Beta Reacts; Aleph Beta's podcast where we reflect and really share our thoughts on a recent video or a course. My name is David Block, I work on content and curriculum development here at Aleph Beta, and joining me today is one of our fan favorites - everyone is really one of our - no I'm just kidding, it's really you Rivky - Rivky Stern. Rivky Stern manages our content.

Rivky Stern:\tThank you so much for having me back David.

\tSo this week Rabbi Fohrman discussed the interesting nature of the Korban Omer, this Omer offering that was brought on the second day of Passover, and how Passover really is a type of Sabbath. So as usual, let's jump straight over to Rivky, I'm going to throw the ball in your court, what did you take out of the course? What did it mean to you?

Rivky Stern:\tRabbi Fohrman has brought this idea up before, this theory that all of the Holidays are actually manifestations of Sabbath within the cycle of the year. So not only do we have a Sabbath every single Saturday but we have Shabbat through every single Holiday. What he's doing in this video is he's talking not only about the Holidays but about these interruptions in the section of text that talks about the Holiday cycle. These interruptions about agricultural laws, about a special offering, are also different types of Shabbats. I think that's particularly powerful because this idea that we have to cease creation, that we have to sort of stop ourselves from dominating, in the way that we could, in the way that we're almost instructed to, these cessations are just as important as the domination itself.

\tI think that's a powerful lesson because it's so hard for us to remember when we're trying to do anything, we want to go all out, we want to climb the corporate ladder, we want to win the baseball game. Whatever we're doing we want to succeed entirely and this idea of sort of no, you also have a responsibility to stop, you also have the responsibility to acknowledge that you are not meant to be all-powerful, you're not meant to dominate entirely. You have to look out for other people, you have to still think about G-d and His ways. I think that's a really powerful idea. I thought it was really, really strong.

\tI don't know, David, what did you think?

David Block:\tWell it's interesting what you're saying because another way of looking at it is that, all of the work that you're doing is really not valuable unless you have that cessation of work. It's almost as if you can work six days a week and that work can be meaningful or not meaningful, depending on how you spend that last day. So if you keep a Sabbath, it really frames the value of all the work that you were doing beforehand. It's almost like listen, I'm working six days a week but by stopping that last day I'm saying I recognize that my creative activity needs to stop. But if you continue, it's almost as like you get into this perpetual problem, you continue to create, you continue to create, you never are able to take a step back and have a relationship with that which you created.

Rivky Stern:\tYeah I think that's a good way of putting it. Because it also tells us that you are not working for the sake of work, you need to stop yourself from this everlasting cycle, you need to pull yourself out of it. So Shabbat can do that - a version of Shabbat which is these agricultural laws that are reminding you that as much as you might create, as much as you might grow thousands of sheaves, you have an obligation to set aside for the poor. All of these ideas are reminding you that there's a larger context and a larger purpose for all of your work.

David Block:\tSo if we get more specific, in this week's Parsha Rabbi Fohrman is specifically speaking about the Omer. That the Omer was this offering that before you brought it you weren't allowed to partake of any of the new grain from that season, but once that offering was brought you're allowed to then use it and benefit from it. One of the really cool parts of that is that all it is, is an acknowledgement, I'm acknowledging that this is really from You G-d. I'm saying, I'm not the creator of this; I can take the grain, I can make my own bread, but it's not really me, it's all from You.

Rivky Stern:\tIt's almost reminiscent of blessings that you make before foods. It's a small thing, you're making a blessing that's one, two lines and you're just saying I appreciate this, I'm conscious of it, and now I'm going to partake of it.

David Block:\tThe Talmud says something really interesting, that someone who eats something without a blessing it's almost as if he was Ma'al, which means he kind of violated, he almost stole from the possession of G-d. Which is kind of weird because it's like it's not G-d, why is the Talmud saying that? So it sounds like that it's [unclear 4:05] of course you should partake of it, of course you'd enjoy and all you got to do is take that step back in the beginning and say, hey where did this come from?

David Block:\t…that you are a part of making, or you are the sole one who has really been involved in this creative process. To take a step back right in the middle of that or even before you begin and say like, hey this is not me, it requires humility, but it's really not easy to put yourself in that proper framework. Especially if you're doing it before, like the Omer, it frames the entire process, saying it's easy to get lost in this project and say it's mine.

\tSo maybe Omer is kind of way to show us how to do it, how can we always keep G-d in our minds as we're being creative. How do we keep others in our plan? The answer might just be that before you begin a process take a step back and recognize what you're doing. When you're in the middle of a process that's when it's really, really difficult, so perhaps the Omer is just telling us that in general you should train yourself to before you do something to always think about, hey what's the source? Where is it coming from? That really frames the entire experience, it becomes much easier throughout the process.

Rivky Stern:\tSo it's interesting, when you talk about sort of framing things right from the start, part of Jewish ritual, one of the first things we do as soon as we wake up in the morning is we say this prayer; Modeh Ani, which is really just an acknowledgement of thank you to G-d for allowing me to wake up in the morning. I think something small like that really helps to frame your day, it's something that - I don't say it every morning, I wish I did. Really serious acknowledgement here. But every time I do say it, I actually do feel that power, I do feel sort of like I'm framing my day in a really positive way and I'm remembering that and I'm keeping that with me. I really like that lesson David, thank you for bringing that out.

David Block:\tBut I wonder how my day would be different if I really took a step back before I did something and said, hey, let me acknowledge the source, let me understand where it's coming from. I wonder how that would really be different.

Rivky Stern:\tLike if I can share something a little bit intimate about you?

David Block:\tDo I have a choice?

Rivky Stern:\tWell I'm in the middle of my sentence, please don't interrupt…

David Block:\tThat's a really interesting question. I tell you one thing, I think that when - either when I start writing lyrics or when I would start singing at a concert somewhere or even as a prayer leader, as a Cantor, I think there is a very big difference when at the beginning of the process you kind of put yourself in the proper mindset. If it's writing lyrics, it's reminding yourself what the goals are so that the lyrics don't just become fun and kitschy but actually meaningful. If it's singing, it's that you don't just get caught up in the moment of excitement but you also realize why you're doing it and why it's meaningful. Certainly when you're praying or leading prayers it's very easy - very easy - to get caught up with just singing or making it sound nice and to totally lose the feeling of what the whole point of the prayer is to begin with.

\tSo if you kind of take a step back - I don't do it always, but sometimes when I'm able to get up there and just close my eyes for a few seconds before I begin and kind of get myself in the proper mindset, there's a tremendous difference in the - just the meaning of the experience for me.

Rivky Stern:\tThat's really cool, I don't do things like this so often, but sometimes I'll be lecturing - I do not like speaking publicly, it's been years and I still get very anxious before I do it, every time. But something that I actually do find calms me down is reminding myself that I don't care if I mispronounce a word, I don't care if I sound a little bit silly, if I make a joke that doesn't land, what matters is the content, what matters is if people don't walk away understanding something a little bit better. Or feeling a little bit more connected. Or creating a larger context for the way they think about Torah. That's the major problem and that's something that I - I really should be worried about. When I can frame myself that way I don't get nervous anymore.

David Block:\tIt's a cool idea. And I think it's also really powerful how the Torah itself, the text actually seems to really point to this value of the Omer, as if it's permitting something that wasn't allowed before. Because if you think about it, the Omer actually served two functions. It allowed us to partake of new grain but it also is the starting point of this 49-day counting period that leads us up to the Shavuot Holiday. The text is very specific to say that it starts when the Omer is brought. What happens on Shavuot? The text says that's when we bring Bikurim. The whole point of Bikurim, of bringing these new fruits to the Temple, before we were able to partake of our fruits we bring our new fruits and we basically declare before G-d these are from You. The fact that I'm here, the fact that I can plant these - I can take them and use them for nourishment for myself, for my family, that's from You. It's almost as if Omer starts the process and Bikurim ends it. It's all that same theme…

David Block:\tIt's all that same theme of before you begin something, before you partake of something, take a step back and realize where it comes from.

\tOkay Rivky, this has been a lot of fun, we hope that you'll join us again of course.

Rivky Stern:\tI look forward to the next one.

David Block:\tTo all of you, thank you so, so much for joining us. If you have any thoughts or comments we'd love to hear them, please leave them in the comments section below the video. Of course, we will hang out very soon in the next edition of Aleph Beta Reacts.