The Fast Of Tevet 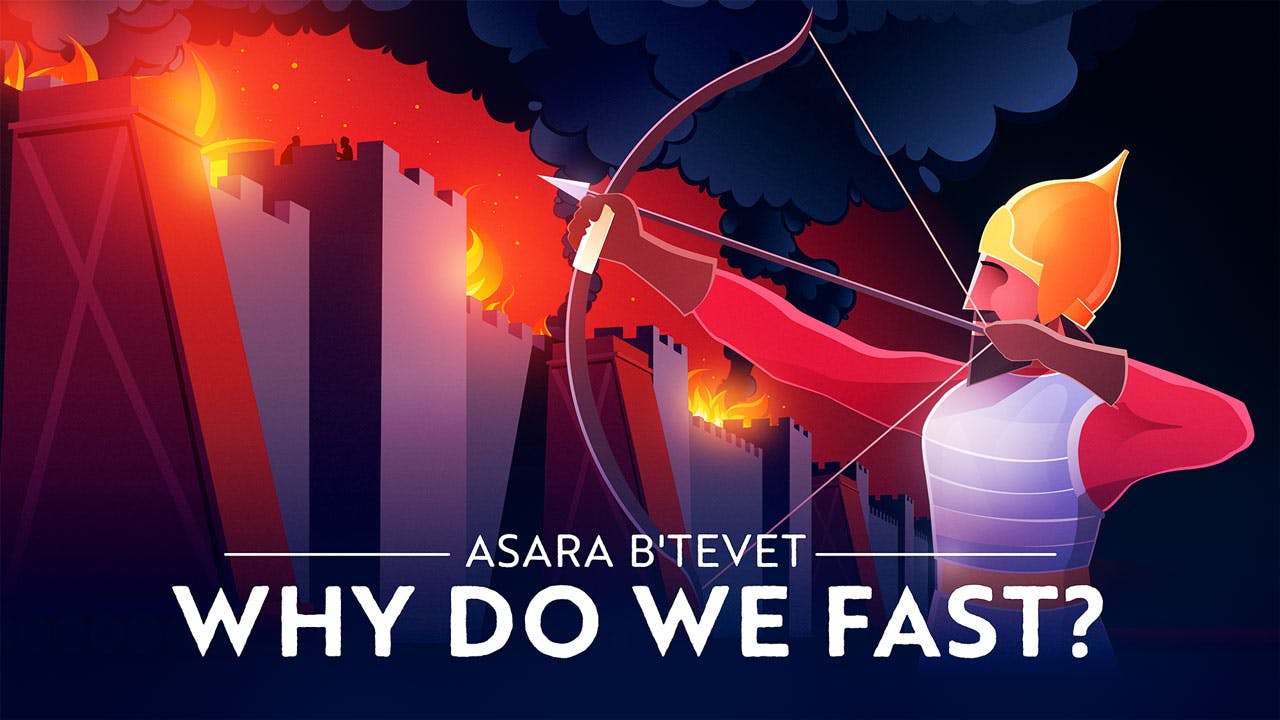 What Happened On The 10th of Tevet

Jews traditionally fast on Asara B'Tevet... but how do we understand the deeper meaning of 10 Tevet? Sure, you might recall some points of trivia about what happened, historically, on 10 Tevet, but why is the Fast of Tevet significant? How should we experience it personally and religiously thousands of years alter?

These are the kinds of questions that we ask every day at Aleph Beta — and our first step, in seeking an answer, is always to turn to the Biblical text.

Now, there are two places where the Bible mentions 10 Tevet and describes, in broad strokes, what happened on this day. But it doesn't seem to offer us more than the barest of accounts. If you read Jeremiah 52 or 2 Kings 25, you'll learn that on 10 Tevet King Nebuchadrezzar, of the nearby Babylonian empire, arrived in the holy city of Jerusalem and set up camp.

His army would remain there for two years before they were finally able to breach the wall of the city and enter. But based on that alone, it's hard to understand why this day should be such a big deal that it warrants its own fast, especially thousands of years later.

However, Jeremiah and Kings aren't the only places in the Bible where 10 Tevet is mentioned. There's another mention – and it is pretty surprising:

"Then the word of the Lord came to me in the ninth year, in the 10th month, on the 10th of the month, saying, 'Son of man, write for yourself the name of the day, this very day; the king of Babylon has besieged Jerusalem on this very day...'" (Ezekiel 24:1–2)

Now, at first glance, this verse may not seem very surprising. But if you look at the original Hebrew wording, you may notice that there's an highly unusual phrase which is used... a phrase which appears twice:

It seems this phrase is a clue to unpacking the meaning behind the Fast of 10 Tevet. For if you look back to those few earlier instances in the Bible where we find this phrase, you'll see that "b'etzem hayom hazeh" has a very particular, and very dramatic, meaning. It occurs in the Book of Genesis, in the story of Noah and the flood, when Noah and his family stepped into the ark as the world around them was about to be drowned. And it occurs in the Book of Exodus, in the story of the Exodus from Egypt, marking the moment when Israel's exile comes to an end and redemption begins.

B'etzem hayom hazeh, it would seem, is a marker of a total and unprecedented transition. Something in the world is changing in the most fundamental way – nearly an entire world is being destroyed; slaves are becoming free people.

But what is so fundamentally transformative about the events of 10 Tevet? The Babylonians set up camp around Jerusalem. So what?? There were lots of moments of drama in the military history of the Jewish people and their neighbors. Why should this rise to the list? On 10 Tevet, the Babylonians didn't even manage to breach the walls of the city; that only happened two years later!

But perhaps that is exactly the point. To understand the significance of 10 Tevet, you can't just study the events of that day in isolation. You have to put it in context, to think about what would happen two years later, and two years after that.

You see, 10 Tevet is not the only fast in the Jewish calendar that relates, in some way, to the destruction of the ancient city of Jerusalem and the beautiful Temple that once stood within it. The 10th of Tevet is one of four such fasts... and together, they tell a larger story.

When we piece together that larger story, we can understand what was so monumental about the Babylonians setting up camp... even though they didn't even break through the walls. We'll understand why the Bible calls it a b'etzeh hayom hazeh kind of day.

What is that story? Let's take a step back and review the basics of those other three fasts and their significances:

Now, we should pause to note that these two fasts are conceived of as part of a single story. In contemporary Jewish practice, 17 Tammuz and 9 Av are linked. The Fast of Tammuz inaugurates a period of mourning which is known as the "Three Weeks," during which certain prohibitions and rituals of mourning are observed. Those laws are amplified in the "Nine Days" prior to 9 Av, with Tisha B'av as the pinnacle.

Together, 17 Tammuz and 9 Av form a single, tragic story of destruction, whose emotional tenor intensifies from one day to the next. But for most Jews, the "story" ends there.

The fast of 9 Av is concluded and we enter a period of "comfort/consolation" (highlighted by the weekly reading of specific biblical excerpts in which "comfort/consolation" is the central theme)... then begin to prepare for the High Holidays of Rosh Hashanah and Yom Kippur... and we quickly forget about the fasts of 17 Tammuz and 9 Av.

But in fact, the story continues. On the day after Rosh Hashanah, we observe the Fast of Gedaliah... which picks up where 9 Av left off. While the scope of destruction that occurred on the 9 Av was unprecedented, it was not complete. There remained yet a glimmer of hope.

A handful of Jews still remained in the land, and the Babylonian king appointed a Jew, Gedaliah, to oversee them. For a moment, there was the possibility that, under Gedaliah, Jewish sovereignty could once again flourish in the land. But that dream was cut short all too quickly, when one of Gedaliah's countrymen assassinated him.

In the aftermath of that act, the remaining Jews fled to Egypt, fearing for their lives. There would be no more Jewish presence in the land. Exile would be a complete reality, and it would be so for the better part of two thousand years. This was the final blow.

And now: step back, survey this context, and ask yourself: what is the meaning of 10 Tevet? What was so transformative about this day?

That the Babylonians came and encamped around Jerusalem, that alone may not have merited a fast day, and almost certainly would not have merited the biblical moniker "b'etzem hayom hazeh." But 10 Tevet did not occur in a vacuum. It is a part of a larger story... and look at what happened in that story.

It starts with the Babylonians encamping around Jerusalem, "on that very day" on 10 Tevet, but it creates a domino effect: it leads to siege, destruction, and exile. It grows in its intensity, its sadness, its finality. It is the beginning of the end. That is what we observe on 10 Tevet.

The Fast of Tevet starts at daybreak and ends at nightfall. It is observed as a day of mourning and repentance, where we refrain from eating and drinking. Selichot and other special texts are added to our prayers on this day.